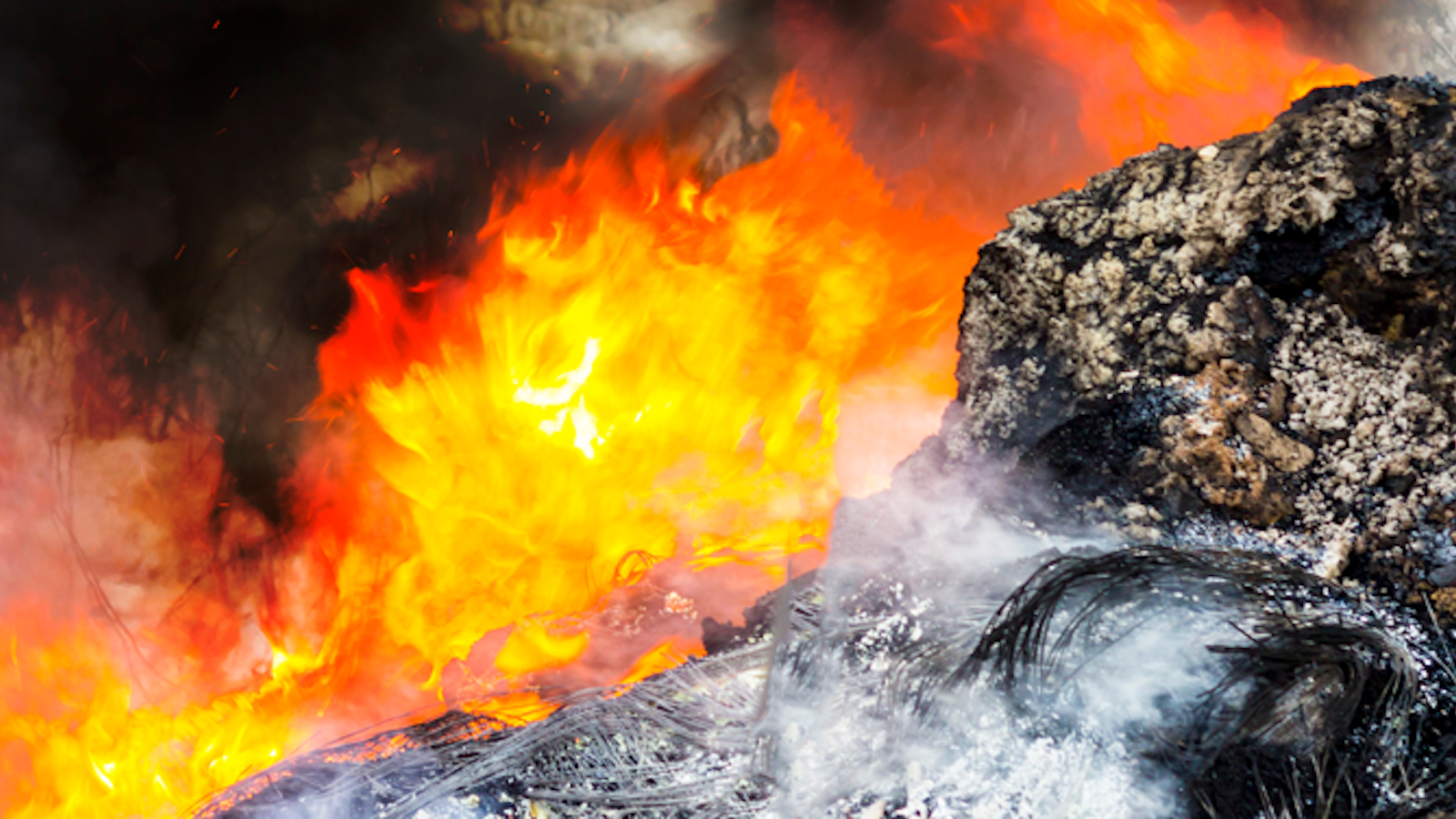 In his poems about strange bodies buried in the bogs of Northern Europe, the late Nobel laureate Seamus Heaney describes peatlands filled with “drowned-mouse fibres dried up and the whole limp, soggy cluster … Of weed leaf and turf mould.” Such is the kit in those vast breathing heaps filled with gasses, acids, and mire, along with human and other history. You think of Tollund Man who died in around 300 B.C., at the age of 40 or so, and was unburied in Denmark by two peat cutters in 1950.

His head was perfectly preserved, still with a sheepskin cap, hair closely cropped, mouth and eyes closed, as though on a summer’s nap but with a sad, wearied expression. He was found six feet down, naked, unable to decompose in the oxygenless, methaned mush of the Jutland peninsula. A noose around his neck suggests he may have been a sacrifice.

Peatlands have been a repository for eons and a source of hearth fuel for thousands of years. They’ve been known as a carbon sink for about a century, certainly since the 1890s when carbon dioxide was understood to be a greenhouse gas. Peatlands cover just 3 percent of the earth’s land surface yet hold five times more carbon dioxide than forests, which cover 31 percent of the land surface. In Europe, peatlands contain five times more CO2 than forests.

Peatlands come in fresh water and tidal wetland varieties, and thrive even in certain warm latitudes. You find them in Indonesia, on the Palm oil-cursed islands of Summatra, Papua, and Kalimantan. You find them in South America, around the Amazon basin, and in Africa. In 2017, as Daniel Grossman reported in National Geographic, British scientists discovered a peatland the size of England in the Congo. The peat had been hidden under jungle canopies, and could only be seen from satellites. By one estimation, this area may contain 30 billion tons of carbon, or the equivalent of three year’s worth of the earth’s total fossil fuel emissions.

But herein lies the dark magic of peatlands, which hold humanity’s deep secrets and vulnerabilities. They offer a moral tale in how to regard aspects of nature that would appear to have no value, a mere bog good only for extracting black blocks of cooking fuel, and, as an Irish peat cutter might add, bugger all else.

But of course, from a climatological perspective, when you add up all the carbon and methane contained in peatlands, which could leak out, plus the amount already in the atmosphere, you begin to realize how in the face of climate change, peatlands are a key to our fate.

How close are we to a failsafe point? “In a certain sense,” says Jonathan E. Nichols, an associate research professor at Columbia University’s Lamon-Doherty Earth Observatory, “there’s zero time. We are seeing, right now, the consequences of climate change. Time is up. It’s just a matter of how we deal with it and who deals with it.”

Nichols is one of the key scientists around the world opening a new window on climate change, revealing how peatlands, on a warming planet, contribute to a shift in the carbon cycle, the delicate balance between the atmosphere and Earth, which sustains life. Peatlands are waterlogged landscapes—from bogs to wetlands to swamps—composed of various plants. Peat is the coarse soil, which we know from our potting mixes, that makes up the surface. Because the underlying plants haven’t decayed in the watery areas, they contain huge amounts of carbon, fixed in them by photosynthesis. As a result, peatlands play an important role as carbon sinks, keeping excessive greenhouse gases out of the atmosphere.

In a recent Nature Geoscience paper, Nichols and Dorothy Peteet, a paleoclimatologist at the NASA Goddard Institute for Space Studies, show that peatlands contain vastly more carbon than previously thought. The reason past estimates came up short, Nichols says, is because the amount of carbon in freshwater peatlands—and in salt marsh lands—has not been accurately measured. That’s partly a matter of bias. As Nichols sees it, places like Eastern North America and Western Europe are heavily sampled because that’s where the great universities of Western culture exist. Naturally, everyone likes to do their work in their backyard. “By comparison, not that many people have gone to Siberia to measure the peat carbon accumulation.”

Beyond bias, the problem in measuring carbon in peatlands is global models have been inadequate. In the past, Nichols explains, scientists simply measured the square mileage of peatlands, and their depths, to come up with a figure for how much carbon they contain. But that assumed that peat accumulated carbon at the same rates. In fact, that’s not the case. “The truth is they are varied,” says Nichols. “Some are very deep and hold lots of peat, and some are shallow and don’t.”

Nichols and Peteet devised an algorithm to measure the various rates of carbon in peatlands in 645 areas in North America, Asia, and Europe. Standing back from their calculations, they saw a whole new picture. They found that since the last Ice Age, over the past 11,000 years, freshwater peatlands in northern latitudes have absorbed at least twice as much carbon as previously thought—from 545 gigatons to 1,055 gigatons. This a conservative estimate. Think of it this way: 1,055 gigatons is more than all the carbon released by humans into the atmosphere through the burning of fossil fuels.

The massive peat storehouses of carbon, Nichols explains, are not necessarily a problem. They are just nature at work. “Peatlands are always breathing,” Nichols says. “So they’re always bringing CO2 in and then respiring CO2 out. But the net is always a sink until something happens.” That something is what has scientists and environmentalists talking a lot more about peat.

The big-picture question is based on a conundrum: It turns out that the fastest warming places in the world are where peat has been flourishing, but it remains unclear whether warming encourages more growth and thus more carbon storage space or whether the peatlands will tend to dry up and decay, and turn from sinks to emitters.

Nichols believes that for the most part peatlands are drying up and decaying more and more quickly as planet temperatures rise. He points out that rainfall patterns in many peatlands are undermining the sphagnum mosses, which decompose and become compacted into peat. One result is that the Sphagnum is being edged out by sedges, hearty grass-like plants that sprout in the marsh tuffs. The sedges grow quickly and decay, allowing oxygen to follow roots down through the layers of peat. That enables organic material to break down and release carbon.

Add to that the furious pace at which humans are burning up wetlands in places like Indonesia. In 2015, the problem came into focus. It was an El Nino year that brought extra dry weather. The water tables were already low because of canals dug to drain the peatlands to plant palm oil groves. Then the fires started, which burned down deep into the peat, creating a vast “killer haze” that lasted for many months and by some estimates killed nearly 100,000 people. The haze has let more than 100 million tons of carbon dioxide enter the atmosphere, just for the first nine months of 2019. Meanwhile, new laws, fines, government promises, and public protest have done little to still the chaos.

“All these processes convert peatlands from absorbers of carbon to emitters,” says Nichols. “And because of the work we’ve done for our study, we know there’s a lot more carbon that can be released into the atmosphere than we thought.”

How much more peatland is there to be discovered in the world? Ian Lawson is a senior lecturer in the School of Geography & Sustainable Development at St. Andrews University and was in the first group to explore the Congo peatlands. He notes that there are some researchers who think there’s much still to be mapped and point to the Amazon basin. “It is still early days, but it looks to me as though some of the higher estimates of total tropical peatland stocks might be unrealistic. The Congo discovery might be the last really big unknown peatland. But there is certainly a lot of mapping still to be done.”

More carbon is stored in northern peatlands than all the carbon released through the burning of fossil fuels.

Lawson points to growing evidence that in the distant past tropical wetlands might have undergone dry periods when they stopped accumulating carbon, and may even begun emitting carbon. “One worry about 21st-century climate change,” he says, “is that it could destabilize the peatland carbon stores, adding very significantly to the total of human-caused greenhouse gas emissions. So one of the main aims of our ongoing work is to understand how sensitive tropical peatlands are to climate change by looking at their past behavior.”

As to the question of whether warming is more beneficial or more destructive to peatlands, Lawson says “as the climate of some parts of the world gets wetter, we would expect to see peatlands expand in those areas. However, that’s a slow process: It takes typically 1,000 years for half a meter of peat to accumulate, and sometimes much longer than that. So, from a climate change mitigation point of view, the focus has to be on trying to protect the peat carbon stocks that we already have, rather than hoping that losses in one region will be balanced by gains in another.”

Nichols, 37, discovered bogs at 14. He was drawn down into the magnetic world of carnivorous pitcher plants, orchids, sundew, not to mention adders and lemmings, and the sphagnum mosses, which host the symbiotic bacteria that oxidize methane. Add the tactile thrill on a hot day of reaching down into the pitch-black wet, “the biological dark matter,” to feel the temperature drop to just above freezing in the length of your arm. He has followed his fascination ever since.

“A single peatland is itself a community,” says Nichols, “and one that is very highly interconnected and can even be thought of as a single unit, though it is made up of many individual plants, animals, and microbes. It responds essentially as a whole to environmental changes it experiences.”

Nichols points to a disruption in that holistic system that may “surprise people.” “If you look at the ingredients for potting mix, a big part of that is peat from peatlands,” he says. “You might think potting soil is a renewable resource. It isn’t. It’s a big hunk of peatland that somebody drained a peatland for, and cut hunks out of it to put in a plastic bag. So that peatland has gone from a sink to a source of carbon.”

Asked for a metaphor to describe the significance of peatland and how one might imagine their destruction, he replies that peatlands are like a library. “The peatlands are a rich archive of the history of our environments,” Nichols says. “Losing peatlands is like burning a library, and the librarian.”

Mark MacNamara is a freelance writer based in Asheville, North Carolina. His last article for Nautilus was “The Artist of the Unbreakable Code.”