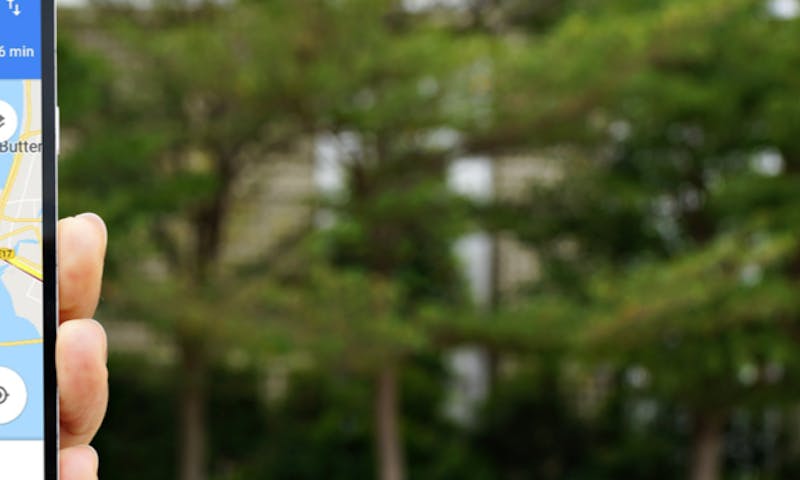 As a writer on physics, I’m always seeking new metaphors for understanding Einstein’s general theory of relativity, and while working on my last book, Spooky Action at a Distance, I thought I’d compare the warping of space and time to the motion of Earth’s tectonic plates. Einstein explained gravity as the bending of spacetime. A well-hit baseball arcs through the air to an outfielder’s glove because it is following the contours of spacetime, which the planet’s mass has resculpted. The mutability of spacetime also means that nothing in the universe has a fixed position, since the framework by which position is defined is fluid. And something like that is also true of Earth’s surface. Nothing on the ground has fixed coordinates because the landscape is ever-shifting.

But then it struck me: If nothing has fixed coordinates, then how do Google Maps, car nav systems, and all the other mapping services get you where you’re going? Presumably they must keep updating the coordinates of places, but how?  I figured I’d Google the answer quickly and get back to Einstein, yet a search turned up remarkably little on the subject. So, as happens distressingly often in my life, what I thought would take 30 seconds ended up consuming several days. I discovered a sizable infrastructure of geographers, geologists, and geodesists dedicated to ensuring that maps are accurate. But they are always a step behind the restless landscape. Geologic activity can create significant errors in the maps on your screens.

One of the people I talked to was Ken Hudnut of the United States Geological Survey, an earthquake researcher who had set up one of the first GPS networks to track plate motions. “Say that you’re standing right in the middle of a road intersection with your GPS receiver and you get the coordinates for your position,” he said. “You look at Google Earth, and instead of being located right at the middle of the road intersection, you’re off by some amount.” Several factors produce these errors. Consumer GPS units have a position uncertainty of several meters or more (represented by a circle in Google Maps). Less well known is that maps and satellite images are typically misaligned by a comparable amount. “It’s partly the GPS hardware that limits the accuracy, and part of it may also be the quality of the georeferencing,” Hudnut said.

An interesting, if dated, study from 20081 looked at Google Earth images in 31 cities in the developed world and found position errors ranging from 1 to 50 meters. It’s not hard to do your own experiments. The image above shows my position in Google Maps while I was standing on my back deck—a discrepancy of about 10 meters, much larger than the stated error circle. When I go to Google Earth and compare images taken on different dates, I find that my house jumps around by as much as 20 meters.

If you’d been paying attention, you would have woken up to find that your house wasn’t at the same latitude and longitude anymore.

In the grand scheme of things, this isn’t much, but does make you wary of high zoom levels. Hudnut said he sees map bloopers in his field work all the time. As technology progresses, so will we all. “We’re fast approaching the day when people will expect accuracies of centimeters in real time out of their handheld devices and then we’ll see a lot of head scratching as things no longer line up,” said Dru Smith of the National Geodetic Survey in Silver Spring, Maryland, the nation’s civilian chief geodesist—the go-to guy on the precise shape and size of our planet.

For the most part, misalignments don’t represent real geologic changes, but occur because it’s tricky to plop an aerial or orbital image onto the latitude and longitude grid. The image has to be aligned with reference points established on the ground. For this purpose, NGS maintains a network of fixed GPS stations and, over the past two centuries, has sprinkled the land with survey marks—typically, metallic disks mounted on exposed bedrock, concrete piers, and other fixed structures. The photo below shows one near my house. But the process of ground-truthing a map is never perfect. Moreover, the survey-mark coordinates can be imprecise or downright wrong.

NGS and other agencies recheck survey marks only very infrequently, so what a stroke of luck that a community of hobbyists—geocachers—does so for fun. “One of the many things we no longer have money to do is send out people to make sure those marks are still there,” Smith said. “Geocachers, through this creation of a new recreation of going out and finding these marks, are sending in tons of reports. … It’s been helpful to us to keep the mark recoveries up to date.”

Errors also sneak in because the latitude and longitude grid (or “datum”) is not god-given, but has to be pegged to a model of the planet’s shape. This is where plate tectonics can make itself felt. Confusingly, the U.S. uses two separate datums. Most maps are based on NAD 83, developed by NGS. Google Maps and GPS rely instead on WGS 84, maintained by a parallel military agency, which has a considerably larger budget. The civilian one is optimized for surveying within North America; the military one sacrifices domestic precision for global coverage.

When NGS introduced NAD 83, replacing an older datum that dated to 1927, it was the geographic version of the shift from the Julian to the Gregorian calendar. If you’d been paying attention, you would have woken up on Dec. 6, 1988, to find that your house wasn’t at the same latitude and longitude anymore. The shift, as large as 100 meters, reflected a more accurate model of Earth’s shape. Vestiges of the old datum linger. You still see maps based on NAD 27. Also, when the U.S. Navy developed the first satellite navigation system in the 1960s, engineers set the location of zero degrees longitude by extrapolating the old North American datum. Only later did they discover they had drawn the meridian about 100 meters east of the historic Prime Meridian marker at the Royal Observatory in Greenwich.

NGS and its military opposite number worked together to align their respective datums, but the two systems have drifted apart since then, creating a mismatch between maps and GPS coordinates. Plate tectonics is one reason. WGS 84 is a global standard tied to no one plate. In essence, it is fixed to Earth’s deep interior. Geodesists seeking to disentangle latitude and longitude from the movements of any one particular plate assume that tectonic plates are like interlocking gears—when one moves, all do—and that, if you add up all their rotational rates, they should sum to zero. The effect of not tying coordinates to one plate is that surveyed positions, and the maps built upon them, change over time.

In contrast, NAD 83 sits atop the North American plate like a fishnet laid out on the deck of a boat. As the plate moves, so does the datum. Other regions of the world likewise have their own local datums. That way, drivers can find their way and surveyors can draw their property lines in blissful ignorance of large-scale tectonic and polar motion. “Most surveyors and mapmakers would be happy to live in a world where the plates don’t move,” Smith explained. “We can’t fix that, but we can fix the datum so that the effect is not felt by the predominant number of users. … Generally speaking, a point in Kansas with a certain latitude and longitude this year had that exact same latitude and longitude 10 years ago or 10 years from now. … We try to make the planet non-dynamic.”

To deepen the datum discrepancy, NAD 83 has not been revamped to account for improved knowledge of Earth’s shape and size. “We are currently working with a system that is very self-consistent and very internally precise, but we know, for example, that the (0,0,0) coordinate of NAD 83, which should be the center of the Earth, is off by about two meters,” Smith said. The tradeoff for keeping surveyors happy is that the North American latitude and longitude grid is increasingly out of sync with the rest of the world (as shown in this diagram below, in which you can see how the North American plate is rotating about a point in the Yucatán). NGS plans an update in 2022, which will shift points on the continent by a meter or more.

The “rest of the world” includes Southern California, which straddles the North American and Pacific plates. The Pacific plate creeps a couple of inches toward the northwest every year relative to the rest of North America. The plate boundary is not sharp, so the actual amount of movement varies in a complicated way. The California Spatial Reference Center in La Jolla has a network of tracking stations and periodically updates the coordinates of reference points in the state. “That’s what the surveyors then use to tie themselves into NAD 83,” said the center’s director, Yehuda Bock. The last update was in 2018.

Like Smith, Bock says that more frequent updating would actually complicate matters: “Surveyors do not like it if coordinates change, so this is kind of a compromise.” For localized line-drawing, it doesn’t much matter, but large-scale projects such as the California high-speed rail system have to keep up with tectonic motion.

Things obviously get more interesting during earthquakes. “What the earthquake would do is the equivalent of what you do with a pair of scissors, if you cut diagonally across a map along a fault line and then slid one side of the map with respect to the other,” Hudnut said. For instance, in Google Earth, go to the following coordinates north of Palm Springs, near the epicenter of the 1992 Landers quake: 34.189838 degrees, –116.433842 degrees. Bring up the historical imagery, compare the July 1989 and May 1994 images, and you’ll see a lateral shift along the fault that runs from the top left to the bottom right of the frame. The alignment of Aberdeen Road, which crosses the fault, shifts noticeably. The quake displaced the land near the fault by several meters.

GPS networks can even see earthquakes in real time. A dramatic video of the 2011 Tohoku quake, made by Ronni Grapenthin at the University of California, Berkeley based on data from the Japanese Geospatial Information Authority, shows the coastline near the quake site move horizontally by as much as 4 meters. The video also shows the waves that rippled outward over Japan (and indeed the world).

Adjustments for tectonic activity take time to filter down to maps. I spoke with Kari Craun, who, as director of the USGS National Geospatial Technical Operations Center near St. Louis, is in charge of producing the USGS topographic maps beloved of outdoors enthusiasts. She says the maps are updated every three years (and even that pace has been hard to maintain with budget cuts). In between, mapmakers figure, the error is swamped by the imprecision of mapping and GPS equipment. Future maps may be updated at a rate closer to real-time. “We have the technology now with GPS to be able to make those slight adjustments on a more frequent basis,” Craun said.

As someone who relies on Google Maps to get around, I look forward to that. But the romantic in me prefers seeing out-of-date maps. They never let us forget the dynamism of our planet.

George Musser is an award-winning science writer and the author of Spooky Action at a Distance and The Complete Idiot’s Guide to String Theory. Follow him at @gmusser