Where Aliens Could Be Watching Us 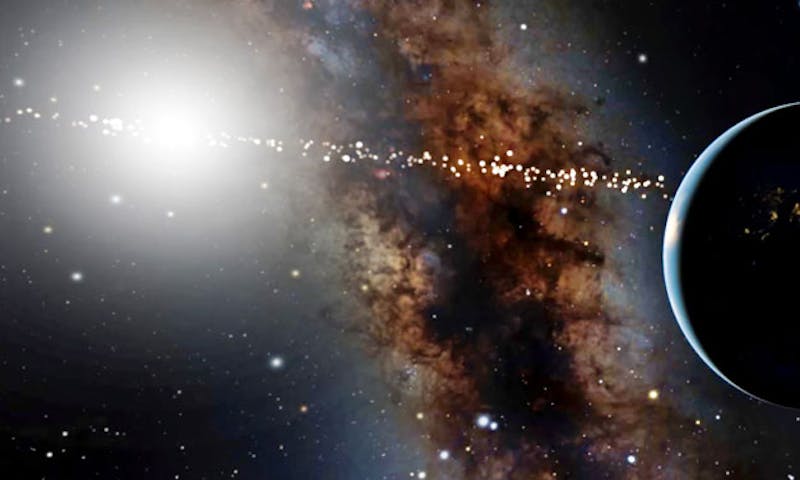 Do you ever feel like someone is watching you? They could be. And I’m not talking about the odd neighbors at the end of your street.

This summer, at the Carl Sagan Institute at Cornell University and the American Museum of Natural History in NYC, my colleague Jacky Faherty and I identified 1,715 stars in our solar neighborhood that could have seen Earth in the past 5,000 years.1 In the mesmerizing gravitational dance of the stars, those stars found themselves at just the right place to spot Earth. That’s because our pale blue dot blocks out part of the sun’s light from their view. This is how we find most exoplanets circling other stars. We spot the temporary dimming of their star’s light.

The perfect cosmic front seat to Earth with its curious beings, is quite rare. But with about the same technology as we have, any nominal, curious aliens on planets circling one of the 1,715 stars could have spotted us. Would they have identified us as intelligent life?

All of us observe the dynamics of the cosmos every night. Stars rise and set—including our sun—because Earth rotates among the rich stellar tapestry. Our night sky changes throughout the year because Earth moves in orbit around the sun. We only see stars at night when the sun doesn’t outshine them. While circling the sun, we glimpse the brightest stars in the anti-sun direction only. Thus, we see different stars in different seasons.

The discussion rolls around to: “Does life on Earth qualify as advanced?”

If we could watch for thousands of years, we could watch the dynamic dance of the cosmos unfold in our night sky. But alternatively, we can use the newest data from the European Space Agency’s GAIA mission and computers to fast-forward the time before our eyes, with decades unfolding in mere minutes. While we can only see the light of the stars, we already know that more than 4,500 of these stars are not alone. They host extrasolar planets. Several thousand additional signals indicate even more new worlds on our cosmic horizon.

Astronomers found most of these exoplanets in the last two decades because of a temporary dimming of their stars when a planet, by chance, crossed our line of sight on its journey around its star. The planet temporarily blocks out part of the hot star—and its light—from our view. Telescopes on the ground and from space, including NASA’s Kepler and TESS (Transiting Exoplanet Survey Satellite) mission, found thousands of exoplanets by spotting this dimming, which repeats like clockwork.

The time between dimming tells us how long the planet needs to circle its star. That allows us to figure out how far away an exoplanet wanders from its hot central star. Most known exoplanets are scorching hot gas balls. We can tell when planets orbit closer to a central star than others because they need less time to circle it—we also find those faster than the cooler ones farther away. But about three dozen of these exoplanets are already cool enough. They orbit at the right distance from their stars, where it is not too hot and not too cold. Surface temperatures could allow rivers and oceans to glisten on the surfaces of these planets in this so-called Habitable Zone.

This vantage point—to see a planet block part of the hot stellar surface from view—is special. The alignment of us and the planet must be just right. Thus, these thousands of known exoplanets are only the tip of the figurative exoplanet iceberg. The ones we can most easily spot hint at the majority waiting to be discovered.

But what if we change that vantage point? If anyone out there were looking, which stars are just in the right place to spot us?

Our powers of observation have been boosted by the European Space Agency’s Gaia mission. Launched in 2013, the Gaia spacecraft is mapping the motion stars around the center of our galaxy, the Milky Way. The agency aims to survey 1 percent of the galaxy’s 100 billion stars. It has generated the best catalog of stars in our neighborhood within 326 light-years from the sun. Less than 1 percent of the 331,312 catalogued objects —stars, brown dwarfs, and stellar corpses—are at the right place to see Earth as a transiting exoplanet. This special vantage point is held by only those objects in a position close to the plane of Earth’s orbit. Roughly 1,400 stars are at the right place right now to see Earth as a transiting exoplanet.

The perfect cosmic front seat to Earth, with its curious beings, is quite rare.

But this special vantage point is not forever. It is gained and lost in the precise gravitational dance in our dynamic cosmos. How long does that cosmic front-row seat to Earth transit last? Because the Gaia mission records the motion of the stars, we can spin their movement into the future and trace it back into the past on a computer. It shows us the night sky over thousands of years since civilizations bloomed on Earth and gives us a glimpse of a night sky of the far future, millennia away.

If we had observed the sky for transiting planets thousands of years earlier or later, we would see different ones. And different ones could find us. We calculated that 1,715 objects in our solar neighborhood could have seen Earth transit since human civilizations started to bloom about 5,000 years ago and kept that special vantage point for hundreds of years. Three hundred and nineteen objects will enter the Earth transit zone in the next 5,000 years.

Among these 2,034 stars, seven harbor known exoplanets, with three stars’ exoplanets circling in this temperate Habitable Zone. However, the small region around the plane of the Earth’s orbit, where all these stars lie, is crowded. Astronomers usually don’t look for planets there. Generally, it is easier to find exoplanets around stars in non-crowded fields. But now we have a reason: to discover the planets that could also discover us.

NASA’s Kepler mission stared for more than three years at about 150,000 stars about 1,000 light-years away. These 150,000 stars fit in a small fraction of the sky. Its goal was to estimate how many stars harbor exoplanets. The answer is exciting. Every second star has at least one planet, big or small, and about every fourth star hosts a planet in the Goldilocks Zone. These results provide cautious optimism about our chances of not being the only life in the cosmos. It also means that about 500 exoplanets in the Habitable Zone should be on our list, waiting to be discovered.

The three systems that host planets in the Habitable Zone in the Earth transit zone are close enough to detect radio waves from Earth. Because radio waves travel at light speed, they have only washed over 75 of the stars on our list so far. These stars are within 100 light-years from Earth—because light had 100 years to travel since Earth first started to leak radio signals.

Ross 128b, an exoplanet a mere 11 light-years away from us, could have seen Earth block the sun’s light about 3,000 years ago. But it lost this bull’s-eye view about 900 years ago. Another exoplanet, Teegarden’s Star b, which is a bit heavier than Earth, and circles a red sun, is about 12.5 light-years away, and will start to see Earth transit in 29 years. And the fascinating Trappist-1 system, with seven Earth-size planets at 40 light-years distance, will be able to see Earth as a transiting planet but only in about 1,600 years.

With the launch of the James Webb Space Telescope (JWST) later this year, we will have a big enough telescope to collect light from small, close-by exoplanets that could be like ours. A particular combination of oxygen and methane has identified Earth as a living planet for about 2 billion years. That combination of gases is what we will be looking for in the atmosphere of other worlds. This exoplanet exploration will be on the edge of our technological possibility, but it will be possible for the first time. Future technology should be able to characterize exoplanets, not just in transit. But for now, telescopes like the JWST collect only enough light from the atmosphere of close-by transiting worlds to explore them, allowing us to wonder whether nominal curious astronomers on alien worlds might be watching us too.

Of course, no aliens have visited us yet, and we haven’t found any cosmic messages from them. Is that because we’re unique? Have other civilizations destroyed themselves? Or are they just not interested in us?

In my Introduction to Astronomy class at Cornell, I ask students whether they would contact or visit an exoplanet that is 5,000 years younger than Earth or 5,000 years older. Without fail, they pick the older planet and its potentially more advanced life. More “advanced” than us. During our discussions, the concept of advanced life invariably rolls back around to us. Would life on Earth qualify as intelligent for anyone watching?

After all, we’ve been using radio waves for only about 100 years, and so those waves would only have traveled 100 light-years so far. We have set foot on the moon but not farther yet and are only starting to think about interstellar travel. So our interstellar travel resume is awfully thin.

One thing that an alien astronomer would likely see is our atmosphere. If they had been watching us for a while, they would have seen that we destroyed our ozone layer—but we also managed to fix it. So maybe we would have scored a point on their intelligence scale. Now, of course, they see our atmosphere is becoming concentrated with carbon dioxide and shows no signs of abating yet. But maybe every civilization goes through this, every civilization nearly destroys its habitat before figuring out a way to save themselves from themselves.

If any aliens are out there watching us from those 2,043 stars in our solar neighborhood, I hope they’re also rooting for us.

Lisa Kaltenegger is the founder and director of the Carl Sagan Institute at Cornell University, and an associate professor in astronomy. She is a leading expert in modeling potential habitable worlds and their detectable spectral fingerprint, which can be detected with the next generation of telescopes. She has served among others on the National Science Foundation’s Astronomy and Astrophysics Advisory Committee (AAAC), and on NASA senior review of operating missions. She is a Science Team Member of NASA’s TESS Mission as well as the NIRISS instrument on the James Webb Space Telescope. Asteroid Kaltenegger7734 is named after her. Twitter: @KalteneggerLisa and @CSInst.

Lead image: A view of the Earth and sun from thousands of miles above our planet, with stars in position to see Earth transiting around the sun brightened and the Milky Way visible on the left. Credit: Open Space/ © AMNH