Why Is Hawaii Evolving So Many Species of This Wingless Beetle? 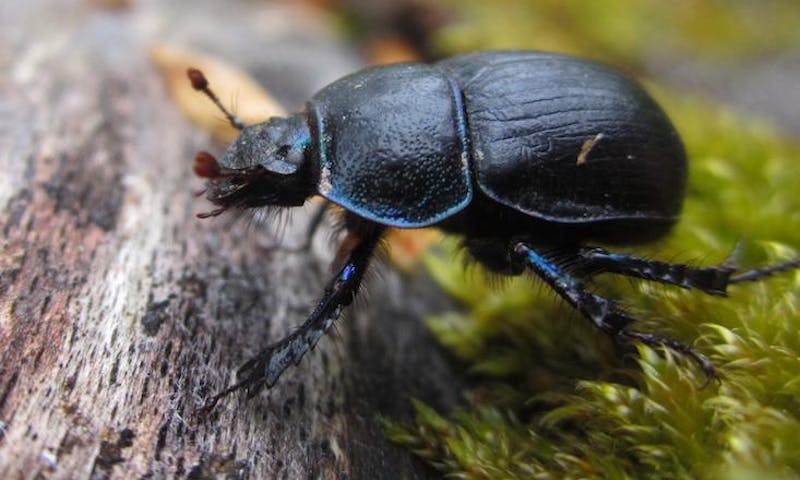 Two Mecyclothorax beetles abandon their relatives on the forest floor to climb up a tree. They settle into a moss home, eat, mate, and die. A couple hundred years or so pass until one of the original beetles’ offspring walks back down. But all the close relatives it once had there are already gone. There’s nothing but strangers.

This may sound like a philosopher’s origin story for the diversification of beetles, but this hypothetical example of evolution on overdrive has actually happened. It’s called rapid speciation, a phenomenon Cornell University entomologist Jim Liebherr has been unraveling for the past two decades of his career. In the volcanic jungles of Hawaii, he’s captured hundreds of specimens of Mecyclothorax beetles. They belong to the carabid beetle family (more commonly known as ground beetles), which contains around 400 species.

Assuming there are about 100 million different species on Earth, not counting most microbes, and a single origin of life about 4 billion years ago, this means one new species arises every 400 years, says B. Jesse Shapiro, a biologist at the University of Montreal, and colleagues. “This estimate is very rough and does not account for extinction events or ‘bursts’ of speciation.” The Mecyclothorax beetles are a prime example of such a “burst.” Their allopatric speciation—speciation due to geographical barriers—occurred extremely rapidly due to the unusual nature of their environment.

Their enormous diversity was showcased in ZooKeys a few months ago, which listed the 74 new beetle species Liebherr and his colleagues recently identified after repeated trips up the wet, densely forested sides of Haleakala. “Australia has about 25 species of Mecyclothorax, the Society Islands have 108, and Hawaii has 239,” says Liebherr. “So a state the size of Massachusetts—not to pick on Massachusetts—has 10 times as many [beetle] species as an entire continent.” Even more amazing than their vast diversity is the rate they’ve evolved into different species. In the last 1.9 million years or less, Liebherr says, they’ve diversified 10 to 20 times faster than their mainland counterparts. The discovery could help scientists better understand the murky process of speciation.

On the sides of Haleakala, where the beetles live, lava periodically flowed down the slopes, cutting the region into discrete segments like a pie, dividing the bugs. The volcanic mountain is now covered in a variety of different habitats, some dry, some extremely wet. If the beetles survived volcanic eruptions, they had to adapt to a new locale, and stay there. “I think it’s because a lot of these species of insects are homebodies,” Liebherr says. “They’re wingless bugs. I think it’s this intrinsic loss of dispersal that drives change.”

Today, a variety of beetle habitats overlap, but the various “micro-environments” on the island they were forced to adapt to in the past have already transformed them into different species. A key element in Mecyclothrax’s rapid evolution is a certain specialization of lifestyle. Some beetles, within a square kilometer, for example, can be fine-tuned to feed in the wet puddles on the ground, say, or on moss lining a tree. One of the most surprising and memorable moments of Liebherr’s career was the discovery of a land-dwelling carabid beetle living underwater. “Ecological limits break down at the micro level,” says Liebherr.

Shortly after he found the underwater land-dwelling beetle, his colleague Andrew Short found something like its opposite: a tree-dwelling water beetle. For kicks, they traded bugs. The two beetles’ capacity for ecological crossover is due to the extreme climates of the smaller Hawaiian Islands, says Liebherr. They “offer new opportunities that you don’t see on the mainland.”