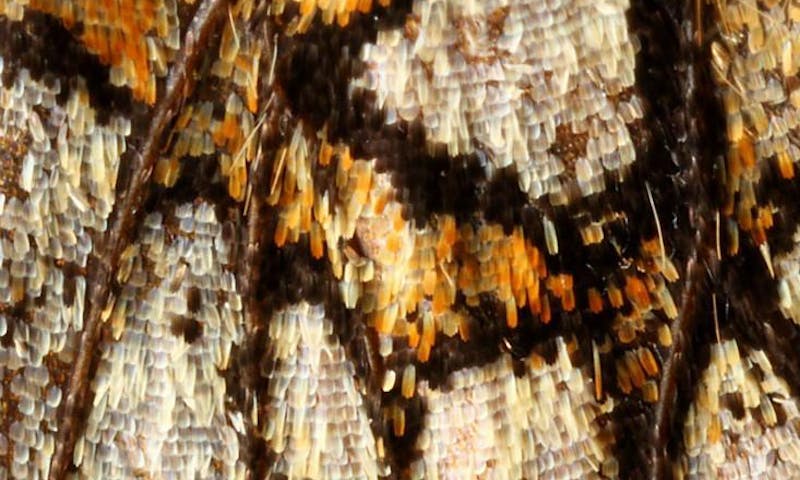 This classic Facts So Romantic post was originally published in June, 2013.

What makes a butterfly’s wings so remarkable isn’t just that unpredictabilities underlie their colors, but that they’ve harnessed the probabilities.1 Randomness and uncertainty are translated into the ordered, functional patterns of a monarch or checkerspot. And in this, the butterfly’s wing is not unique, but a manifestation of principles ubiquitous in biology.

Out at the leading edges of theoretical and computational and experimental biology, where known and unknown meet, cellular machines have been redefined.2 The proteins of which they’re made don’t fold and unfold and operate according to some stepwise blueprints. Shape and function are exquisitely sensitive to infinitesimal energetic shifts, to the motion of atoms and the forces they exert.

1. The pigment-synthesizing genes that guide coloration in a butterfly’s wing are an ideal model system because they’re relatively simple and straightforward. That’s the exception, not the rule. Most traits involve multilayered cellular and genetic relationships: networks of interactions nestled inside networks of interactions, often behaving in nonlinear ways, a whole biological nesting doll of complication. Which makes their harnessing of randomness and uncertainty all the more extraordinary.

2. There’s a certain amount of uncertainty to these descriptions. It’s fairer to say, some scientists who study these matters think this is happening, and the fragments of biochemical data we’re able to retrieve at molecular and atomic scales inside cells match our computational models, but it’s slow going.