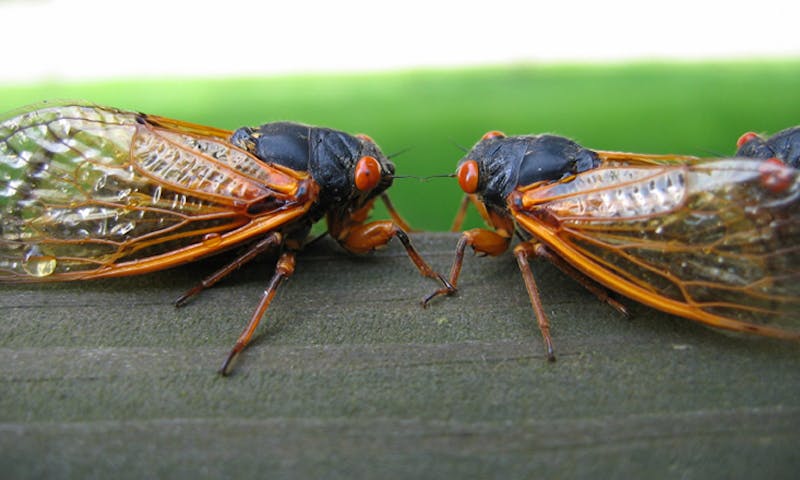 When
the cicadas of Brood II burst into open air—and into song—later
this month, after living 17 years in darkness below ground, they will
have one thing on their collective, eerily synchronized mind: sex.
Though millions of humans inhabiting the mid-Atlantic states will
soon hear the insects’ incredible racket, they’re probably
unaware that what they’re hearing is an enormous mating festival.

These
particular insects have been underground—where the sexually
immature nymphs dig around, suck on tree roots, and bide their
time—since 1996. This is their coming-out party, their debutante
ball, and we all get to be a part of it, whether we decide to make
ice cream out of them,
fry
them into tasty little bug nuggets,
or just sit out on the porch in their deafening hum, pondering the
peculiarities of other species’ reproductive habits.

Rising
en masse from the ground is particularly spectacular way of showing
that you’re ready to reproduce, but the big majority of creatures has
some signal. If you’ve visited a zoo, you may have seen those swollen
pink rumps
on female chimps, proclaiming that they’re in a period of fertility.
Other creatures release tantalizing smells or put up other signs that
say they’re open for reproductive business.

Though
it’s pretty clear when humans reach sexual maturity—one might
argue that the flood of hormones around puberty creates the societal
equivalent of the cicadas’ roar—we don’t actually show when we
are fertile. The days in a woman’s monthly cycle when she has an egg
slotted into position, ready to be fertilized, are very well-hidden,
even from the woman herself. A 2007
study
found that lap-dancers got significantly more tips from male
customers when they were fertile, suggesting that there may be signs
that no one is consciously aware of; that study has spawned (so to
speak) a line of research on other evidence that women’s ovulation
is somehow perceptible. In any case, compared with most other animals, the
clues are extremely subtle. Instead, women look like they could be
fertile anytime. We don’t usually think of it this way, but having
breasts that continuously protrude, rather than just when one is in
heat or pregnant, is pretty weird in the animal kingdom.

It’s
still mysterious why humans are so different in this respect—what
our species might have gained from keeping our reproductive status
under wraps. It
could be
that looking fertile all the time, even when one is not, means that
males have to stick around all the time in order to ensure that they
have offspring live to reproduce. This could mean that couples have
to commit to one another long-term, with each contributing to the
raising of some very time- and resource-hungry offspring—a good
thing for infant survival. Or it could be that uncertainty over
whether a given female is fertile means that there’s less conflict
between males to mate with her and hence less violence within a
population. Or maybe that not knowing for sure that a baby is one’s
own cuts down on infanticide, a method used by male chimps to
eliminate competitors’ offspring.

At
this point, there’s no consensus as to what might have happened to
make this our status quo—these are all stories
spun by scientists to help get a handle
on
the problem.
But they are something to consider while listening to cicadas drone
and reflecting on how funny it is to witness a distantly related
species’ grandiose fertility peak, while our own remains a secret.