A medicine that disrupts the DNA replication of cancer cells may be within reach. 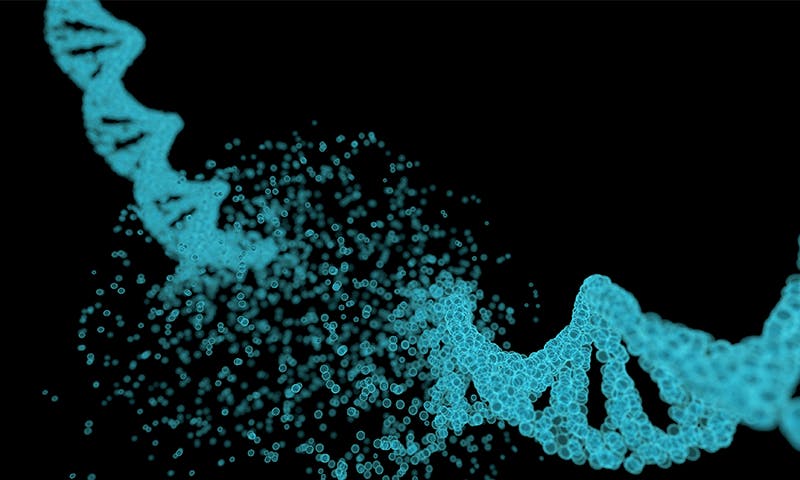 Himanshu Brahmbhatt was staring at the results of a clinical trial that looked too good to be true. A co-founder and CEO of EnGeneIC, a biopharmaceutical company, Brahmbhatt was running a small trial that was testing a fundamentally different approach to fighting cancer. Patients in the group had grim prospects. They had exhausted all other options. With nothing left to lose and not expecting any miracles, they enrolled in the trial. They wanted to give it one more chance. Now their scans showed their tumors had stopped progressing. Even more remarkable was they didn’t have the same type of tumors. They had malignancies affecting different organs—lungs, bladders, colons, pancreases—and yet, they uniformly did well.

“These people were facing death,” Brahmbhatt says. “Then we started seeing that they were actually succeeding. You could see in the scan that the tumor has stopped growing. It was a feeling of such extreme internal joy that it’s very difficult to describe.”

The results may have appeared miraculous, but they were anything but. They stemmed from fundamental research into cell division that forms the basis of the EnGeneIC process. A longtime advisor to the company, Bruce Stillman, professor of biochemistry and president and CEO of Cold Spring Harbor Laboratory, has been studying the process of DNA replication, which plays a key role in cell division and cancer progression.

“Cancer cells multiply out of control,” says Stillman, who has devoted his career to studying DNA replication. “When a cell becomes a cancer cell, the very first thing that happens is the cells begin to divide without the normal controls. And the first thing that has to happen before the cell has to divide into two daughter cells is to copy the genome. So, the path that leads to cancer is in part dysregulation of the process that controls DNA replication.” The abnormal DNA replication causes the accumulation of mutations in the genome that advances cancer. Interfering with the process of cell division has long been a focus for treating cancer, but because normal cell division is unavoidably affected also, many of these chemotherapies are toxic. EnGeneIC has figured out a way around this problem by combining a novel method of drug delivery with a way to stop DNA replication.

Stillman was a graduate student when he understood that cell division, and DNA replication in particular, were key targets for treating cancer. That insight inspired him to switch careers from medicine to medical research. At the time, the science of DNA was a burgeoning field and there was a lot to discover; Stillman was a pioneer. He uncovered many of the mysteries of the genome replication process and what sets the copy machinery in motion. He has spent 40 years putting together the pieces of the molecular puzzle. “I wanted to understand how this process really works,” he says. And he did.

Deep inside the tens of trillions of cells that comprise your body, the DNA replication machinery is constantly speeding along in many tissues. In the bone marrow alone, 500 million red and white blood cells are produced every minute. There’s about two meters of DNA in each cell, neatly woven inside the nucleus. To keep the blood cell supply steady, about a billion meters of DNA must be copied every minute. “You could wrap that around the Earth along the equator about 25 times,” Stillman says. It is inevitable that over the course of a person’s lifetime, this process will make mistakes—some harmless, but others leading to malignant mutations. So, understanding the cogs of this complex machinery may hold the key to combating many cancers.

They sent a Trojan horse into cells and turned cancer’s own trickery against it.

Stillman’s group first discovered the ORC in yeast, experimenting with a strain called Saccharomyces cerevisiae, normally used to make bread, wine, and beer. (Notably, in 2020, he won a Heineken Prize for Biochemistry and Biophysics for his work, although it didn’t have anything to do with brewing—the prizes are awarded to the leading figures in the above disciplines as well as in art, medicine, history, and environmental and cognitive sciences.) As Stillman’s team kept studying the ORC phenomenon, they realized this ancient process works very similarly in humans. “It’s remarkable to think that yeast and humans share the same process of DNA replication,” Stillman says. “We started off with yeast cells and we were able to walk through evolution and eventually get to the human genes.”

Another key player in DNA replication is an enzyme called DNA polymerase. DNA polymerases synthesize the new DNA by adding nucleotides—the gene building blocks—one by one to the growing DNA chain. “There are about 15 polymerases involved in this procedure,” Brahmbhatt says. “Each of these polymerases does a different job inside that DNA replication process.” If some of them stop working, the cell won’t be able to divide.

Knowing the key points in DNA replication has allowed scientists to ponder ways to jam the copying gears inside the rogue cells. At the biochemical level, gear-jamming isn’t an insurmountable task—today scientists can forge a small molecule that can bind to some of the players and “disable” them. The real challenge was to deliver these molecules inside the cancer cells and no others. If these molecules ended up inside healthy cells, they would halt the normal replication processes, killing the cells—and the person with them.

Scientists know cancers have an uncanny ability to travel through the body by slipping in and out of blood vessels to hitch a ride through the bloodstream. They do it by loosening the arterial walls and squeezing through. “Normally, our blood vessel walls are all sealed pipes,” Brahmbhatt says. “But around wherever the cancer is growing, the blood vessels are known to be very defective. They have got a lot of holes in them.”

Brahmbhatt and his collaborator Jennifer MacDiarmid devised a clever ploy. They would send a Trojan horse into malignant cells and turn cancer’s own trickery against it.

The Trojan horse, in this case, is a product of a harmless bacteria that’s been genetically engineered to have specific qualities. When this genetically engineered bacteria divides, it yields a tiny non-living cell of 400 nanometers in diameter—the right size to slip through the damaged vessels and mingle with the tumors. To the nano-cell, Brahmbhatt and MacDiarmid affixed a “molecular hook” that the tumor grasps and swallows. The nano-cell is also packaged with “interfering” RNA molecules—distant relatives of the RNAs used to create the first coronavirus vaccines. Known as siRNAs, the molecules interfere with the expression of specific genes. They can target some of the DNA replication enzymes and inhibit their function. Brahmbhatt says Stillman provided invaluable advice about which polymerases to target to kill malignant tumors.

It was a feeling of such extreme joy that it’s difficult to describe.

Brahmbhatt and MacDiarmid tested the nano-cell assassins in mice and then in a small human trial. “There was a big fear at first,” Brahmbhatt says. “Everybody was frightened because these molecules have never been sent specifically into a human, and everybody knew that if this thing gets into the wrong cells—meaning into the normal cells—it could be fatal.” That’s why the study’s first cohort included only people who had exhausted all other options.

When he looked at the first set of scans, Brahmbhatt recalls, “what we saw was something fantastic. With these molecules, which are inhibitors of DNA replication, we could extend their lives.” More surprising was the fact that—unlike systemic chemotherapies—there were no toxic side effects. Currently Brahmbhatt’s company, EnGeneIC, is preparing for the next phase of clinical trials.

Should the siRNA method prove its worth in larger trials, the public health impact will be much greater than just putting another anti-cancer compound on the market. Stunting DNA replication has the potential to become cancer’s universal treatment. The research Stillman did, as well as others who chose to study the fundamental biology of DNA replication, is now not only bearing fruit, but—combined with the right delivery system—has the potential to change the cancer treatment paradigm. And that’s the beauty and importance of the fundamental research, without which modern clinical applications would be impossible. “Today, those discoveries have become critical,” Brahmbhatt says. “If this works, we won’t just cure one type of cancer. We would cure cancer across the board.”