Tumors recruit the nervous system to help them spread. Scientists are looking for ways to stop it. 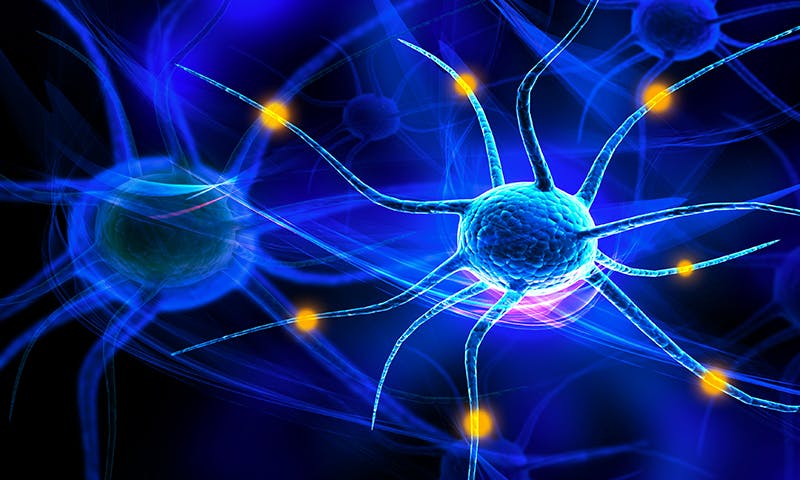 Manish Vira, a urologist at Northwell Health in New York performs prostate biopsy procedures three to five times a week. He inserts 12 needles into specific locations on the prostate gland, identified by MRI images that reveal malignant or suspicious lesions. The samples then go to a pathologist who determines whether cancer is present and how aggressive it is. “It’s a standard protocol,” explains Vira, who is also a chief oncologist at Northwell.

For the past few years, however, that standard protocol had a few extra steps. Now, the biopsy “wash”—a collection of molecules washed off the sample—goes to the research lab of Lloyd Trotman, a professor at Cold Spring Harbor Laboratory, who studies what makes these tumors aggressive or aids their metastases. Trotman’s team looks at the tumors’ genomic signatures—their genetic make-up, which can make them more aggressive. They look at the tumors’ microenvironments—the molecules that cancer surrounds itself with. And while researching these factors, they also dig into something that’s rarely looked at in cancer biology: the nervous system and its role in helping tumors spread.

In the past decade, scientists have realized that cancer isn’t just a localized disease, but a systemic problem that involves the whole organism. They realized that tumors don’t exist in a vacuum but require a permissive and supportive environment to take hold and thrive. To do so, tumors create their own ecosystems, in which they recruit and reprogram the body’s own cells—sometimes even those that are supposed to destroy cancer—to help them grow and travel to new locales. What is less understood is the role that nerves play in these complex physiological interactions, says Jeremy Borniger, an assistant professor at CSHL Cancer Center, who works with Trotman. In the complicated scenario of how tumors burgeon and metastasize, the nervous system had not received its due attention.

“If you look at any cancer review paper from until about five or six years ago, you see that the research has been hyper-focused on the oncogenes, the tumor microenvironment—cancer cells, immune cells, endothelial cells, fibroblasts, maybe a couple of other cell types,” says Borniger. That biological picture is of course important, but not complete. “The nerves are almost never mentioned. So what’s been missing from the equation is how the tumor interacts with the body on the physiological scale, such as with the nervous system.”

Tumors don’t exist in a vacuum, but require a supportive environment.

Trotman and Borniger try to view cancer as a whole-body disease, in which the brain (the central processing unit) and the nervous system (its communication channels) occupy an important spot in cancer progression—perhaps even the final frontier in our understanding of this disease. For starters, no single organ can exist without being “innervated”—meaning served and attended by nerves, which deliver signals back and forth from the brain, directly affecting how this body part functions. The brain, for its part, is the master regulator of the body, coordinating all chemical processes that happen inside us. The brain collects the info about the body through the nervous system and via circulating chemical cues in the blood. Then, it interprets the info and sends back chemical messages to neurons that pass them to the organs, muscles, and glands—to monitor and influence the activity of those tissues.

“The nervous system controls everything in normal tissues—growth or atrophy, or anything else,” says Massimo Loda, a molecular pathologist at the Weill Cornell Medical Center in New York. So there’s a reason to believe that the same is happening with malignancies. “Cancer tissue grows fast so it needs the support of the nervous system,” Loda says. Moreover, scientists know that certain cancers have a particular predilection for nerves. “For example, breast and prostate tumors have a propensity to look for nerves and kind of invade and travel through those nerves,” Loda says. It is as if there are some shadowy dealings happening between the nerve endings and tumors. “That suggests that there is synergy there.”

The observational knowledge suggests that a greater amount of nerves bunching up around a tumor signals grimmer prognosis. For example, when pathologists assess the severity of prostate cancer, the number of nerves that surround these tissues factors in. “The pathologist will score that, and if there’s a lot of nerves in the area, it usually means a worse, or a more urgent situation,” Borniger explains. “To us, that seems like a blind spot or a missing link.”

It’s not fully clear why the nerves and their involvement in cancer had languished in scientific obscurity for so long, but scientists have a few ideas. As strange as it sounds, the peripheral nervous system was the anatomy textbooks’ stepchild. In Gray’s Anatomy—the medical bible written by English doctor Henry Gray in 1858 that still educates generations of physicians—the nerves and their relationships with some organs remain somewhat of an afterthought. “I decided to read the current 42nd edition of Gray’s Anatomy, and it’s an interesting picture,” Trotman says. “For liver, a site of end stage prostate metastasis, you see descriptions and depictions of all kinds of cells, all kinds of conduits and blood vessels, but to this day the nerves are usually not depicted. The innervation of some organs is apparently not a major topic in the organ anatomy.”

Modern science, of course, pays far more attention to the nervous system and the brain than the 150-year-old manual. In 2016, the Allen Institute for Brain Science had published a map of the entire human brain—a digital atlas of our central processing unit. A 2021 effort preserved, sliced, and imaged a human surgical fragment of a cerebral cortex. And yet, the peripheral nervous system, which is the conduit between the brain and the rest of the body is still not fully specced out. “We don’t really have great maps of the peripheral nervous system, and how it connects the brain to these organs,” Borniger says.

A reason for this disconnect is neuroscientists rarely talked to cancer biologists.

Another reason for this strange disconnect, is that traditionally neuroscientists rarely talked to cancer biologists. “Neuroscientists don’t typically work on cancer and cancer biologists typically don’t work with neuroscience questions,” Borniger says. Historically, the two disciplines remained too distant from each other and too siloed inside their own respective dominions.

“That’s what we are trying to change,” Trotman says—essentially merging the two fields to study the neuroscience of cancer. In that realm, the prostate makes a particularly good research subject, he explains. “Prostate is a gland, which means that it already has a lot of nerves surrounding it,” he says. “The nervous system controls how the gland functions, such as squeezing out liquids. So it’s already organized in a way that’s amenable to our research.” And with the new tools that became available to scientists in the past decade or two, they are now able to peek at those shadowy nerve-tumor dealings in real time.

Several major technology breakthroughs are making visualizing nerve and tumor interaction possible. One of them was the usage of fluorescent technologies that allowed scientists to engineer tissues to glow a certain color—red, green, blue. Another major advancement at peeking into the tangly webs of nerves, neurons, and axons were the optogenetic tools that let researchers manipulate the activity of neurons with light.

With these technologies, mice can be engineered in such a way that whenever a tumor naturally grows in them, it fluoresces in, for instance, the color red. “That means that any descendants of those cancerous cells will also glow red wherever they go,” Trotman explains, which gives researchers a way to see how metastases spread and take hold. Similarly, mice can be engineered to have organs innervated by nerves of shimmering green or some other hue. That gives researchers an unprecedented opportunity to see how nerves and tumors play together. “With these tools we can label all the nerves that are innervating a particular organ,” Trotman says. “And then we can see the green nerves and the red tumor cells, and how they interact.”

Perhaps more importantly, these visualization techniques can help reveal the shortcomings of existing treatments and aid in the development of better ones. For example, the current standard-of-care drugs for prostate cancer—so-called chemical castration medications that stop sex hormone production—makes tumors shrink, but only for a while. “It’s a temporary regression, after which the relapse is guaranteed,” Trotman says—and medics don’t know why. The glowing mice can help shed some light on that. “We want to know what happens to the peripheral nerves that are near the tumor,” Trotman says. How does the shrinking tumor rebound? Does it stimulate nerve growth? Is it able to get more nutrients as a result? “Those are the questions we’d like to find answers for.”

This work may ultimately help answer other puzzling questions about cancer causes. “For example, prostate cancer is much more prevalent in tall men,” Massimo shares—likely because it has something to do with the growth hormones that come from the brain. Does the tumor somehow hijack the growth hormones for its own benefit? Are the nerves involved? If so, can scientists devise drugs that interfere with that process? Perhaps some of these questions can be answered, too.

When it comes to severity and prognosis, prostate cancer risks can be deceptive. Compared to many other aggressive malignancies like brain or pancreatic tumors, prostate cancer usually doesn’t spread or kill quickly—many men live 10 years and even longer after their diagnosis. But because it is so common—about 12.5 percent of men get it, according to the National Institutes of Health—overall, it takes a lot of lives. In 2019, 224,733 cases were reported, and 31,636 men succumbed to it. “The problem is that it’s so widespread,” Trotman says. “Since only 5 to 10 percent of people who have it will develop metastatic prostate cancer, an average patient has a 90 percent chance of being fine. But because so many men develop it, it is still the second cause of cancer death in men, after lung cancer. So if we can prevent or reduce the occurrences of the metastatic disease, we really can save a lot of people.”