Born Lucky: The Genetics of the Four-Leaf Clover 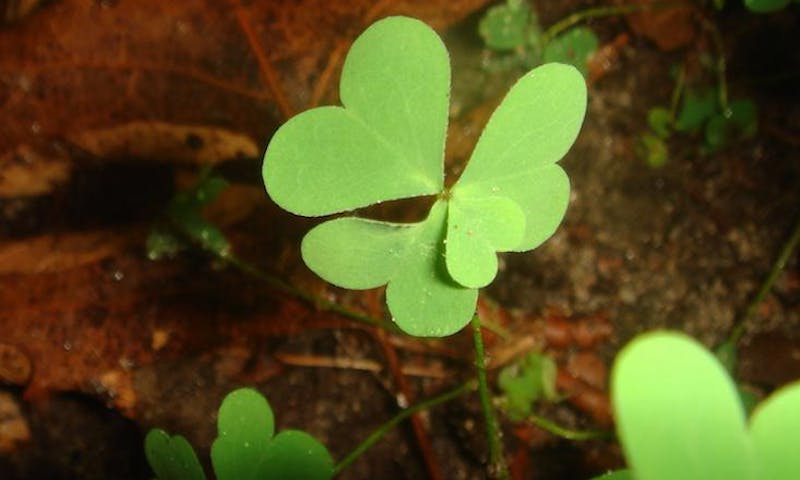 Each year, from 1913 to 1917, the psychologist Edmund S. Conklin would hand out a questionnaire to his new psychology students. Conklin wanted to see which superstitious habits or beliefs were the most and least enduring. He found that just over a quarter of college students believed in lucky four-leaf clovers, making it the second most commonly cited superstition. Knocking on wood was first. (The top five are still with us today, though not the sixth. Sleeping on a wedding cake may be ill-advised, but bad luck?)

For centuries, various cultures have fixated on the rare four-leaf clover, a tradition that “began when superstitions, myths and legends were strong,” reported the New York Times in 1990. “According to English folklore, if someone dreams of clover, it means a happy marriage filled with wealth and prosperity.” According to another way of thinking, “the clover has magical qualities, because it is in the form of a cross, which was supposed to guard the possessor from evil spirits.” How did the four-leaf clover get associated with magic and luck? No doubt because of its rarity. After all, you can knock on wood any time, but finding a four-leaf clover takes considerable effort. White clover naturally grows three leaflets per leaf in about 9,999 out of every 10,000 plants.

Recently scientists have begun to explain why the four-leaf brand is so rare. The theory, as in so many other genetic cases, is that leaf count reflects a combination of factors. “The genetics have to be there,” said Wayne Parrott, a plant geneticist at the University of Georgia. “Then if the genetics are there, the environment determines whether the four leaves show up or not.” But Parrott said that even after his studies, he’s still not sure what triggers the growth of that extra leaflet.

Part of what makes searching for the cause of the fourth leaf so complicated is that each clover plant has four copies of each chromosome, instead of the standard two in animals. Each pair comes from a different ancestor species, a sort of genetic swapping that is impossible in animals but happens without much fuss in plants, where species hybridize much more easily. Usually, hybrids are sterile, since chromosomes need to pair up perfectly for cells to replicate, and chromosomes from different species don’t match up quite right. But plants can occasionally leapfrog this problem by duplicating their entire genome, ending up with four copies—two matched pairs—of each chromosome.

Of course, scientists aren’t motivated in this search by the belief that understanding the fourth leaf would win them some luck. It’s pragmatic. Clover is an important crop for livestock because it is a rich source of protein, and no one has studied how extra leaves might affect the nutritional value or other commercial characteristics of clover. Some breeders wanted an alfalfa strain with four leaves instead of three, since cows get most of the alfalfa’s nutrients from its leaves, just as they do with clover. The breeders’ plan backfired—the alfalfa’s strain also came with thicker stems that were harder for the cows to digest. “The thicker stems kind of cancelled out the fours leaves,” Parrott said. But in clover, the costs and benefits to cattle of a fourth leaf has “never really been looked at.”

Parrott has also tested clover varietals with focus groups—he hopes the plants will catch on as garden ornamentals because clover restores nutrients to the soil. He’s presented some clover varietals with high rates of four-leaf individuals but “people complained,” he said. “They want enough four-leaves so that they can find it without looking too hard, but not so many that it’ll take the fun out of it.”

Sometimes, looking for new clover cultivars takes a violent turn. In 2008, a Korean team pelted clover plants with gamma radiation during pollination, then bred the resulting plants against each other. One plant produced this way, which they called Jeju Lucky-1, grew leaves with an extra leaflet around 60 percent of the time. It’s not the first such artificially four-leaved variety to be developed (another, nicknamed Legendary Good Luck, clocks in at 50 percent lucky). Compare that rate with 1 in 10,000—one calculation estimates that in order to find one four-leaf in a field of clover, you’d have to examine every plant in a 13-square-foot area.

You don’t have to be a scientist to be a clover breeder and enthusiast. Take Shigeo Obara, a Japanese man who spent six decades breeding clovers. He stuck to traditional breeding methods, crossing clovers with extra leaves against each other, and thought that four leaves on a clover was nothing like enough. Around his death, he snagged a Guinness World Record for the most leaves on one clover plant, beating his own previous record—53 more leaflets than the usual. But there’s no word on whether it was 53 times luckier.

WATCH: The geochemist and plant lover Hope Jahren on the perspective-changing power of science.