Two Jackson Wild fellows on what we can learn from the birds. 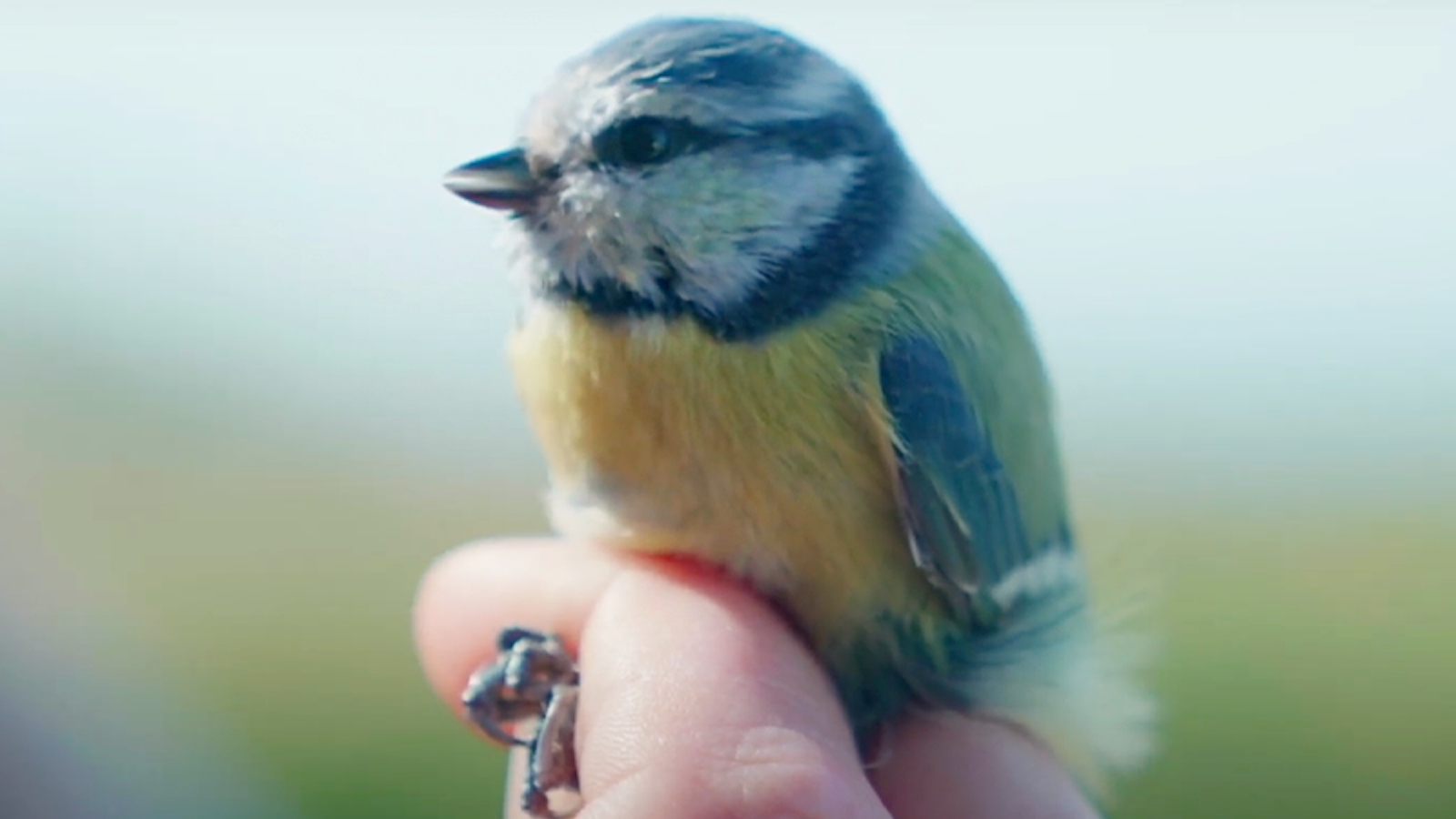 The Jackson Wild Media Lab offers a fellowship each year to media creators to hone their skills in furthering science and conservation communication. The nine-day fellowship is highly competitive—2022’s 16 participants were chosen from a pool of 350 applicants, including Brazilian native Laura Pennafort and Tennessean Johnny Holder. Jackson Wild pairs scientists with filmmakers who dive right into conceiving and executing a project within a short time frame (four days). In addition to a crash course in production using professional grade tools and equipment, media fellows are exposed to input and advice from seasoned filmmakers and other experts.

Pennafort began her academic studies in biology, eventually doubling up to study filmmaking. She completed her education in England, where she has lived for five years. Increasingly focused on wildlife documentaries, Pennafort finds in them a perfect merging of her passions for science and nature.

I have a deep impression now of a whole world I’ve been neglecting.

Holder’s life experience includes eight years in Army Special Operations, an earth science and geography undergraduate degree, and “by serendipity,” enrollment in Montana State University’s Natural History Filmmaking program. Holder’s thesis film for Montana State, “Sonora,” won the 2022 special jury award for Diversity and Inclusion in the Jackson Wild Media Awards (it was also an overall finalist). During his time as a media fellow, Holder and his colleagues made “Sound of the Lake” focused on bird life in Europe’s second-largest reed bed.

Nautilus caught up with Pennafort and Holder to talk about their films, their passions, and their experience with Jackson Wild.

You are originally from Brazil, and now live in England. Do these locations influence your filmmaking?

I’ve been in England for five years. I moved here because things were getting uncertain in Brazil and I didn’t know if I could finish my education there. I studied biology and then combined it with filmmaking. Wildlife documentaries combine these passions for me, and England is a great place to pursue this work. Blue-chip documentaries are often produced here. These films show nature as mostly untouched, animals doing beautiful things. It’s a bit of a fantasy, but it serves a real purpose, to engage the viewer.

At the same time, I am committed to sharing the amazing biodiversity of Brazil with the rest of the world. People don’t realize what’s there and how threatened it is—the situation calls for a more straightforward call to action.

Part of your fellowship entailed making a short film with several of your peers in four days. You made “The Bird Ringer,” about an ornithologist who monitors birds to better understand and protect them. How did you coordinate so quickly to develop the narrative?

It was challenging. We interviewed Flora about her work, and the whole time I kept thinking: I don’t see a conflict or a storyline in what she is telling us. We filmed her and studied the transcript of her talk to try to structure the soundbites.

This kind of activism is another way to engage people to care about wildlife.

Flora sets mist nets to capture birds, which she then measures and weighs, checking their overall health. Then she places a metal ring around the bird’s leg. In the event she captures the bird again, she can compare notes to evaluate how well it’s doing.

Yes, so we filmed her at work, and different habitats in the park. One incredibly useful dimension of the fellowship was that we were able to show a rough cut of the film to a team of industry professionals before we finalized it. They helped us streamline our presentation of the material. We had jumped back and forth between Flora in the lab and outside. They told us this was disorienting. So we reflowed the scenes, staying inside longer, staying outside longer.

Was it easy enough to agree on how to do that?

Yes, we worked it out. We also got great assistance with the ending. We saw three different ways to conclude the film: to emphasize her work with kids, to highlight her research, and the ending we chose, which focuses on how, in Flora’s words, “you only protect” what you know. I wanted to keep all three points in the film, but understood that for it to work, the film needed to have one direction.

Prior to the fellowship, you made a film about the Pantanal, Brazil’s extraordinary tropical wetland, home to incomparable biodiversity.

The Pantanal experienced a very severe drought in 2020, right as the pandemic started. The wetlands naturally go through dry cycles and flooding, but this was extreme. A wildfire took over the whole ecosystem. I learned about a group of people rescuing animals burned in the fire—jaguar, tapir, all kinds of species were hobbled by their injuries. I interviewed people rescuing and rehabilitating the animals—I wanted to tell their story. These were ordinary people coming to help; a tour guide who usually takes people to see the animals was confronted with everything on fire. She dedicated herself to stopping the fire and rescuing the animals. This kind of activism is another way to engage people to care about wildlife.

How did your experience at Montana State influence your filmmaking?

They told us at the beginning:  you are filmmakers first, scientists second. Although I have a strong leaning toward wildlife, I found myself drawn to human-based stories. I made a lot of off-the-wall projects, about artists working in maximum security prisons, and clowns performing in refugee camps. I went to Columbia, South America, to do a follow up project on the clowns, and pivoted to ex-FARC soldiers doing species rehabilitation in the Amazon. [FARC refers to the Revolutionary Armed Forces of Columbia, a Marxist guerilla group involved in that country’s long and complex internal conflicts.] I wanted to do my thesis on the subject but it was far outside the scope of what I could accomplish at the time. I came across this group of FARC birders, who had spent some time with Juan Pablo Culasso, the blind birder who became the subject of “Sonora.”

“Sonora” focuses on an expert birder who knows his subject mostly by ear. He is completely blind and has been since birth. Watching the film is an unusual experience, because you are focusing on the audio experience he moderates, as much as the visual. You understand you are seeing what he can’t see, but his hearing is far superior. It feels like he is much closer to the birds.

It was easy to show his character—he’s so strong. All the narration came from a talking-head interview—we didn’t use that footage. He is so poetic, he speaks like he is reading something complete and practiced, but that’s just the way he talks. He started birding when he was quite young, 6 or 7. His uncle gave him a field recorder. When you put on headphones with a special microphone, even for a non-blind person it opens up another world.

And he’s making amazing contributions to what we know about birds.

He estimates he has identified about 1,100 bird species, each with three to five different calls. So he estimates he knows about 3,000 to 5,000 calls. He has been building sound catalogs and uses a Spotify account—he’s very diligent about that.

It’s interesting that your short film as a media fellow also focuses on sound.

Well, we were assigned a scientist and had four days, as you know, to make the film. Part of the challenge was to find one narrative to characterize the long-time work of Erwin Nemeth, who has spent decades observing the reed belt at Lake Neusiedle—he knows so much about every aspect of its history and life. He was excited to focus on the soundscape, just one aspect of the reed belt, which is one of the last of its kind. Most reed belts in Europe have been lost to development, and they are critical habitat for migrating birds. He was one interesting cat.

Both experiences must have taught you a lot about birds.

Yes, I have a deep impression now of a whole world I’ve been neglecting and not appreciating fully. I hear birds so much more now. I learned about the health of an ecosystem and how birds contribute to it, what monocultures do to bird life.

But the work also left an emotional and spiritual impression. On my last mission in the military, I experienced injuries and got Lyme disease. I underwent a slew of events that forever altered my path in life. My athleticism, my ability to bounce back and go hard, these felt taken away from me. From Juan Carlos especially, I learned to sit in silence. I learned how to listen and heal in that sonic world.