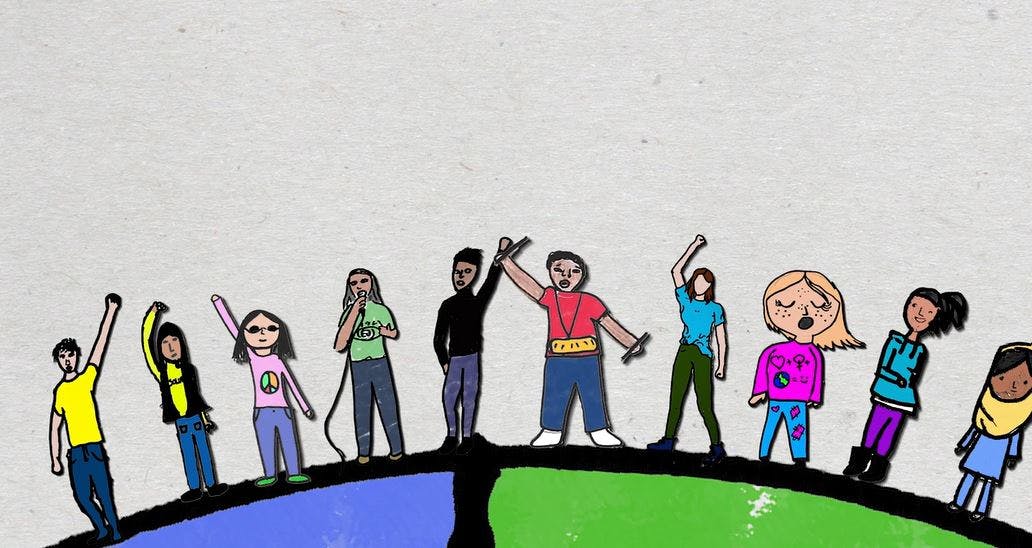 Colorful animations unfurl across the screen in “Divest,” a highest distinction film in Redford Center Stories, an annual film-making competition open to middle school students ages 10-14. The Center fosters the power of storytelling through film, and the 2021 competition attracted more than 400 entries from students across the country who took on the theme of environmental justice.

In “Divest,” six students contributed to drawings that help explain a basic but complex investment strategy. The students are part of Earth Guardians and Youth vs. Apocalypse, groups that support climate activism. Nautilus sat down with two of the student leaders, Magdalena Meyers-DahlKamp and Ra’Mauri Cash Hamilton.

The students involved in this film go to different schools. How did you begin to collaborate?

Ra’Mauri: We met at Senator Diane Feinstein’s office in San Francisco in 2019. Some of us were from Earth Guardians and others from Youth vs. Apocalypse. We were talking to her about the Green New Deal. She gave us a lot of pushback. The event went viral and got about 10 million hits in two days.

Magdalena: Ra’Mauri and I became friends, with about 23 other students as well.

How did you choose to focus your climate action on CalSTRS?

Magdalena: A teacher from Fossil Fuels California told us she’d been going to California State Teacher’s Retirement System (CalSTRS) meetings for two years to get them to divest, and she was exhausted. Finding out that our teachers’ retirement money is being invested in oil companies was just crazy. Most of them have no idea about this. It’s so ironic, and it’s so scary. We began to go to CalSTRS meetings about two and a half years ago, to protest.

How have your efforts been received?

Ra’Mauri: Some adults say some really kind stuff, tell us we’re amazing. Others are dismissive and even racist. One of the lesser known things is that such a high percentage of oil extraction occurs in communities of color.

How do you organize your efforts?

Ra’Mauri: We usually meet once a week and do a lot of activities, sending out letters for example. We do role-playing to better understand the finance part of it all. We know that what we are doing is going to benefit everyone, even the people who are trying to stop us.

In addition to the film, you both bring personal artistry to your activism.

Magdalena: I really love dancing and horseback riding. I disrupted one CalSTRS meeting by starting to dance in the middle of it.

Ra’Mauri: I have the most energy of anyone I know. I do a lot of drumming. Most of the things I do in life feel a bit off—but this is always right. I was born to do it.