She Rewrote the Moon’s Origin Story

The Apollo missions were a giant leap for science. 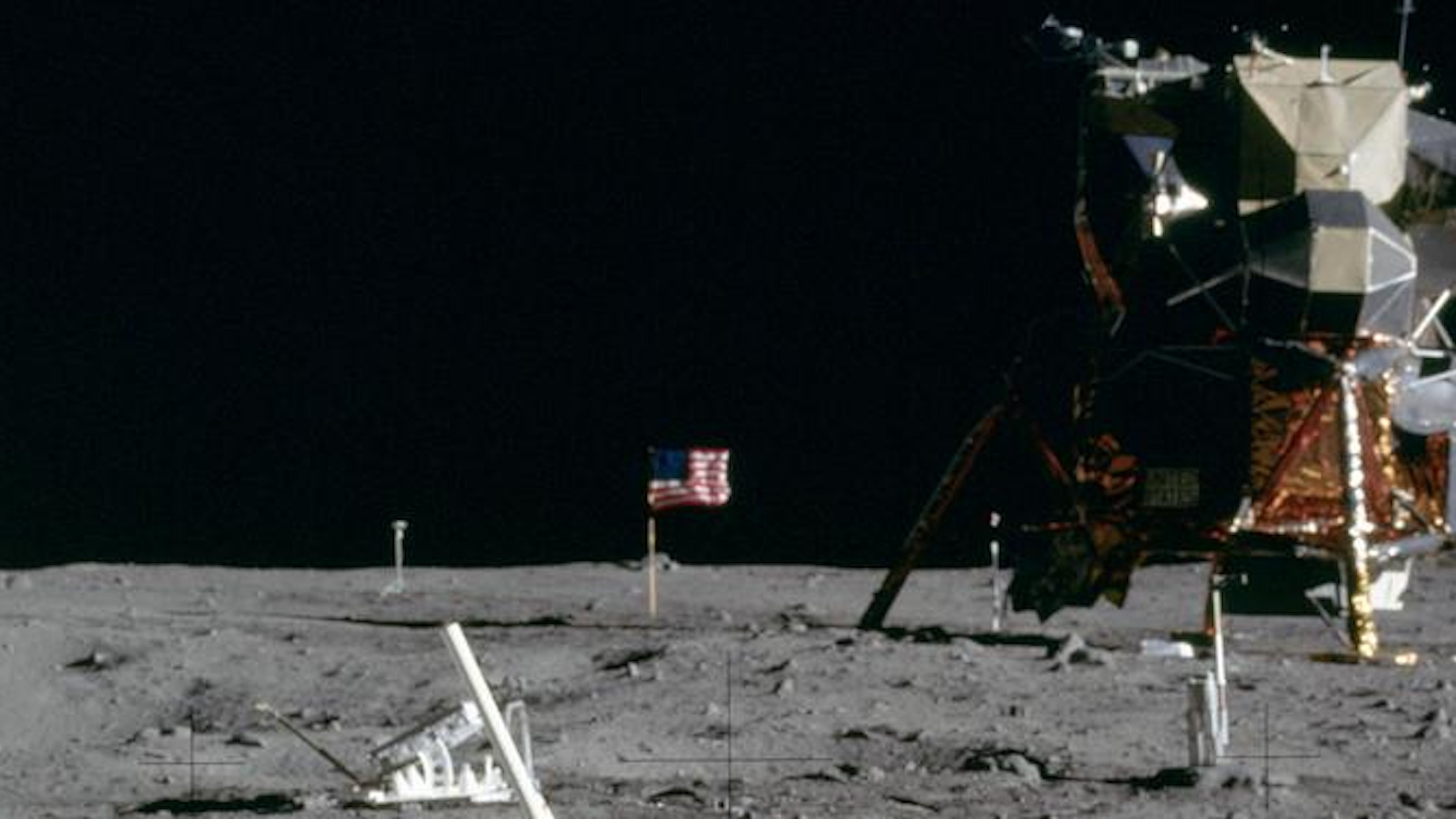 Fifty years ago, in the Oval Office, Richard Nixon made what he called the “most historic phone call ever.” Houston had put him through to the men on the moon. “It’s a great honor and privilege for us to be here,” Neil Armstrong said, “representing not only the United States but men of peace of all nations, and with interest and a curiosity and a vision for the future.” The Apollo missions—a daring feat of passion and reason—weren’t just for show. In reaching the moon in 1969, fulfilling John F. Kennedy’s promise seven years earlier to go there not because it would be easy, but hard, humanity tested its limits—as well as the lunar soil.

The samples the astronauts brought back to Earth have revolutionized our understanding of the moon’s origins, leading scientists to imagine new models of how our planet, and its companion, emerged. One of those scientists is Sarah T. Stewart, a planetary physicist at the University of California, Davis. Last year she won a MacArthur Foundation Fellowship, unofficially known as the “genius grant,” for her work on the origin of Earth’s moon. Her theory upends one held for decades.

Stewart’s bold vision grows out a love for science planted in high school in O’Fallon, Illinois. “I had phenomenal math and physics teachers,” she said. “So when I went to college, I wanted to be a physics major.” At Harvard, where she studied astronomy and physics, “I met amazing scientists, and that sparked a whole career.” She earned her Ph.D. at Caltech.

“Magma rain accretes to form the moon within the rock vapor that later cools to become the Earth.”

Nautilus spoke to Stewart last year about the scientific significance of the Apollo lunar landings, as well as how her laboratory experiments, which replicate the pressures and temperatures of planetary collisions, informed her model of the moon’s birth.

How significant were the Apollo moon landings to science?

This July marks the 50th anniversary of the Apollo moon landing. The rock samples that the Apollo missions brought back basically threw out every previous idea for the origin of the moon. Before the Apollo results were in, a Russian astronomer named Viktor Safronov had been developing models of how planets grow. He found that they grow into these sub- or proto-planet-size bodies that would then collide. A couple of different groups then independently proposed that a giant impact made a disc around the Earth that the moon accreted from. Over the past 50 years, that model became quantitative, predictive. Simulations showed that the moon should be made primarily out of the object that struck the proto-Earth. But the Apollo mission found that the moon is practically a twin of the Earth, particularly its mantle, in major elements and in isotopic ratios: The different weight elements are like fingerprints, present in the same abundances. Every single small asteroid and planet in the solar system has a different fingerprint, except the Earth and the moon. So the giant impact hypothesis was wrong. It’s a lesson in how science works—the giant impact hypothesis hung on for so long because there was no alternative model that hadn’t already been disproven.

How is your proposal for the moon’s birth different?

What did a faster-spinning Earth do to your models?

The surprising new thing is that when the Earth is hot, vaporized, and spinning quickly, it isn’t a planet anymore. There’s a boundary beyond which all of the Earth material cannot physically stay in an object that rotates altogether—we call that the co-rotation limit. A body that exceeds the co-rotation limit forms a new object that we named a synestia, a Greek-derived word that is meant to represent a connected structure. A synestia is a different object than a planet plus a disc. It has different internal dynamics. In this hot vaporized state, the hot gas in the disc can’t fall onto the planet, because the planet has an atmosphere that’s pushing that gas out. What ends up happening is that the rock vapor that forms a synestia cools by radiating to space, forms magma rain in the outer parts of the synestia, and that magma rain accretes to form the moon within the rock vapor that later cools to become the Earth.

How did you the idea of a synestia come about?

In 2012, Matija Ćuk and I published a paper that was a high-spin model for the origin of the moon. We changed the impact event, but we didn’t realize that after the impact, things were completely different. It just wasn’t anything we ever extracted from the simulations. It wasn’t until two years later when my student Simon Lock and I were looking at different plots, plots we had never made before out of the same simulations, that we realized that we had been interpreting what happened next incorrectly. There was a bonafide eureka moment where we’re sitting together talking about how the disc would evolve around the Earth after the impact, and realizing that it wasn’t a standard disc. These synestias have probably been sitting in people’s computer systems for quite some time without anyone ever actually identifying them as something different.

“The surprising new thing is that when the Earth is hot, vaporized, and spinning quickly, it isn’t a planet anymore.”

Was the size of the synestia beyond the moon’s current orbit?

It could have been bigger. Exactly how big it was depends on the energy of the event and how fast it was spinning. We don’t have precise constraints on that to make the moon because a range of synestias could make the moon.

How long was the Earth in a synestia state?

The synestia was very large, but it didn’t last very long. Because rock vapor is very hot, and where we are in the solar system is far enough away from the sun that our mean temperature is cooler than rock vapor, the synestia cooled very quickly. So it could last a thousand years or so before looking like a normal planet again. Exactly how long it lasts depends on what else is happening in the solar system around the Earth. In order to be a long lived object it would need to be very close to the star.

What was the size of the object that struck proto-Earth?

We can’t tell, because a variety of mass ratios, impact angles, impact velocities can make a synestia that has enough mass and angular momentum in it to make our moon. I don’t know that we will ever know for sure exactly what hit us. There may be ways for us to constrain the possibilities. One way to do that is to look deep in the Earth for clues about how large the event could have been. There are chemical tracers from the deep mantle that indicate that the Earth wasn’t completely melted and mixed, even by the moon-forming event. Those reach the surface through what are called ocean island basalts, sometimes called mantle plumes, from near the core-mantle boundary, up through the whole mantle to the surface. It could be that that could be used as a constraint on being too big. Because the Earth and the moon are very similar in the mantles of the two bodies, that can be used to determine what is too small of an event. That would give us a range that can probably be satisfied by a number of different impact configurations.

How much energy does it take to form a synestia?

Giant impacts are tremendously energetic events. The energy of the event, in terms of the kinetic energy of the impact, is released over hours. The power involved is similar to the power, or luminosity, of the sun. We really cannot think of the Earth as looking anything like the Earth when you’ve just dumped the energy of the sun into this planet.

We actually think that synestias should happen quite frequently during rocky planet formation. We haven’t looked at the gas giant planets. There are some different physics that happen with those. But for growing rocky bodies like the Earth, we attempted to estimate the statistics of how often there should be synestias. And for Earth-mass bodies anywhere in the universe probably, the body is a synestia at least once while it’s growing. The likelihood of making a synestia goes up as the bodies become larger. Super-Earths also should have been a synestia at some point.

The center of the Earth is at several thousand degrees, and has hundreds of gigapascals of pressure—about three million times more pressure than the surface. Jupiter’s center is even hotter. The center-of-Jupiter pressures can be reached temporarily during a giant impact, as the bodies are colliding together. A giant impact and the center of Jupiter are about the limits of the pressures and temperatures reached during planet formation: so tens of thousands of degrees, and a million times the pressure of the Earth. To replicate that, we need to dump energy into our rock or mineral very quickly in order to generate a shockwave that reaches these amplitudes in pressure and temperature. We use major minerals in the Earth, or rocky planets—so we’ve studied iron, quartz, forsterite, enstatite, and different alloy compositions of those. Other people have studied the hydrogen helium mixture for Jupiter, and ices for Uranus and Neptune. In my lab we have light gas guns, essentially cannons. And, using compressed hydrogen, we can launch a metal flyer plate—literally a thin disk—to almost eight kilometers per second. We can reach the core pressures in the Earth, but I can’t reach the range of giant impacts or the center of Jupiter in my lab. But the Sandia Z machine, which is a big capacitor that launches metal plates using a magnetic force, can reach 40 kilometers per second. And with the National Ignition Facility laser at Lawrence Livermore National Lab, we can reach the pressures at the center of Jupiter.

What happens to the flyer plates when they’re shot?

The target simply gets turned to dust after being vaporized and then cooling again. They’re very destructive experiments. You have to make real time measurements—of the wave itself and how fast it’s traveling—within tens of nanoseconds. That we can translate to pressure. My group has spent a lot of time developing ways to measure temperature, and to find phase boundaries. The work that led to the origin of the moon was specifically studying what it takes to vaporize Earth materials, and to determine the boiling points of rocks. We needed to know when it would be vaporized in order to calculate when something would become a synestia.

How do you use your experimental results?

What runs in our code is a simplified version of a planet. With our experiments we can simulate a simplified planet to infer the more complicated chemical system. Once we’ve determined the pressure-temperature of the average system, you can ask more detailed questions about the multi-component chemistry of a real planet. In the moon paper that was published last year, there’s two big sections. One that does the simplified modeling of the giant impact—it gives us the pressure-temperature range in the synestia. Then another that looks at the chemistry of the system that starts at these high pressures and temperatures and cools, but now using a more realistic model for the Earth.