The Whale Who Will Come Soon 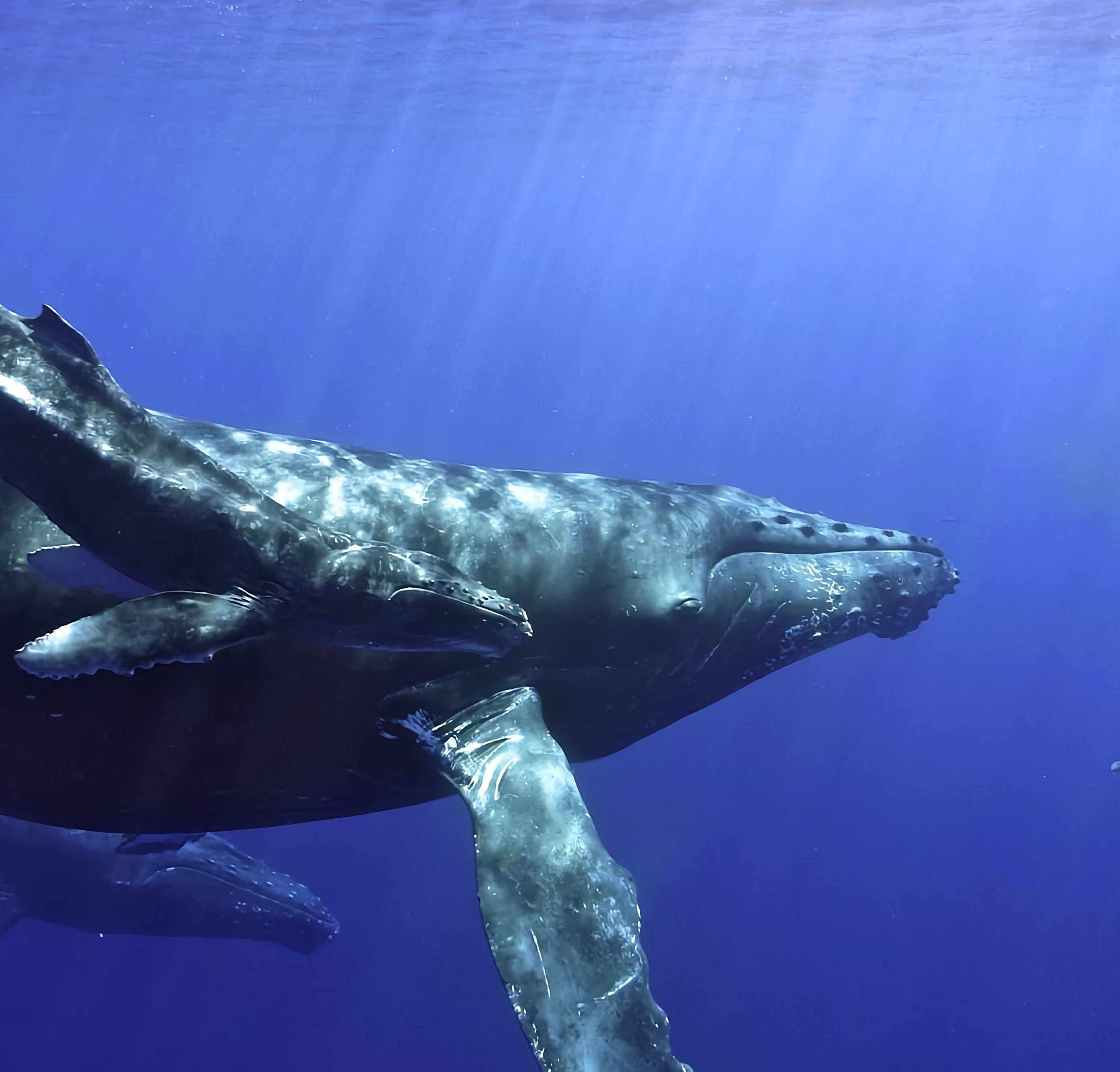 The beachfront narrows to an ocherous ribbon, belted by blue, above and below. After a while, a handful of shearwaters appear in the air above the Cat Balou. The birds flash around us; like knife-thrower tricks at a circus. Diving through the water, each is crowned in a diadem of bubbles. The shearwaters come from Antarctica, like the humpbacks, and also Siberia, South America, and Japan; they arrive in Australia, where they often die in large numbers from exhaustion. Such bird deaths, en masse, are known as “wreck events.” A single wreck event used to happen every ten years or so—the result of irregular, rough weather overtaxing the birds’ reserves—but flock-wide collapses occur almost biennially now, the feathered bodies washing up on the tideline, emaciated with hunger. Their prey are vanishing from the migration route as oceans warm. These shearwaters fly away, to where? I wish I could write These birds leave in the direction of exquisite fortune, to live long, robust lives.

From the cutwater, and either side of the boat, the watchers squint in all directions, and still there are no whales. A few people have given up, withdrawing to the lower deck for a rallying snack. I nurse a cup of instant soup, freckled with rehydrated corn and carrot, warming my hands. The light changes, the ocean turns waxy. Little slaps, notches and gloss.

“The whale who will come soon,” a boy begins, in the rising pitch of hope.

“The whale that will come soon,” a man—I suspect, his father—corrects, not unkindly.

As we wait and the tour meanders on, I ponder whether the pronoun choice isn’t, in fact, more than a semantic niggle. Designating a whale as “that” is distancing and turns the animal, grammatically, into an object. “Who” is personifying and brings the whale into a closer nexus with the speaker by implying it possesses human qualities. Australian newspapers, I think, use “that” for animals. (On returning to shore, I will go to The Associated Press Stylebook to clarify: the stylebook stipulates “who” is appropriate only where an animal has been given a personal name, and it offers this example: “The dog, which was lost, howled,” . . . “Adelaide, who was lost, howled.”) No doubt other languages have more middle-ground pronouns for animals—something between “thing” and “kin.”

I go back up on deck to find the swell has lifted, shortening the depth of our perspective: the Cat Balou is dropped and raised. Water hammocks heap into hummocks, then fall back again. Clouds overhead loose bright patches to blow across the expanse, as if someone had unleashed a stash of foil Mylar blankets, the kind used for hypothermia. The effect is cyclically sedating and awakening.

You believe you could step off the boat and walk for days. Things go on like this for a long while. Then Ros gets on the loudspeaker. “Whaleeey,” she calls out, across  the sun-blown sea. “Whaleeey whale! Here, whaleeey whale! ”

We come to whales to be drawn out into the world, and yet the unpeopled sea is also a state of mind—an inner space.

We come to whales to be drawn out into the world, and yet the unpeopled sea is also a state of mind—an inner space. Our smallness, set against this sublime sea, is connected to the notion that not all the thoughts within us are accessible, that there are thoughts, in some sense, exterior to the self. Vast feelings that slide, beyond command, beneath the wakeful tending of our days. The pleasure is that we are mysterious, even to ourselves. The fabulist ocean, this inscrutable outer space whales return from, in a metaphorical sense, enchants us with our own inward enigmas. Many throughout history have figured the sea analogous to the human unconscious.

The Austrian psychoanalyst Sigmund Freud most notably made popular the expression “oceanic feeling” to account for convictions of limitlessness and eternality that might lead to an inclination for religious observance. Freud connected this belief to the irrecoverable sensations of being a baby—before an infant is aware of its separateness, when the contours of the self are blurred. A bygone time when, Freud claimed, each of us felt at one, with every surrounding object and phenomenon.

It’s often forgotten that Freud began his professional life as an aspiring naturalist with a passion for aquatic environments. Freud’s college drawings are of the nerves in crayfish and lamprey. He studied under the Darwinist Karl Claus, and undertook fieldwork at a zoological research station in Trieste, on the Adriatic Sea, attempting to identify testicles in eels. Later, the concept of oceanic feeling came to Freud through correspondence with the dramatist Romain Rolland, a mystic who described himself as a member of an “antique species,” and whose work with eastern religions in the early twentieth century sought to explain the appeal of pious temperaments. After Freud, the ocean came to denote unbounded inner space, whether that sense of limitlessness formed around a spiritual consciousness or otherwise.

The idea that the unconscious can be envisaged as a sea has its own history. It owes its existence to narratives about what the ocean represents in the Western tradition and the twentieth century, narratives addressing how human mentality functions, and whether an individual’s sense of self, separate from her or his community, is even interesting to plumb (or decorous to expose). It is a trope composed in art, worship, literature. How does a space as boundless and ungraspable as “the sea” come to seem personal and intimate? It took a long time before I came to realize that the processes by which the sea was turned into a metaphor for a person’s unconscious were neither natural nor private. I belong to these narratives—maybe you do too. I pick up whatever thing a dream washes onto my shoreline and turn it over to look, hoping for the shimmery incandescence of pearl shell and fearing, instead, the exposure of a writhing, unspeakable underside—an impulse unmentionable.

The question I am left with is: What will it mean for our inner lives—those of us who cannot disavow the ocean as a psychological motif—if the twenty-first-century sea turns out to be not full of mystery, not inexplicable in its depths, but peppered with the uncannily familiar detritus of human life? How will we delight in a feeling of unboundedness, in the apparent limitlessness, the unknowable space of our unconscious, if the real ocean demolishes its symbolic history?

An emotional landscape, it turns out, can also begin to acidify. Something hard to quantify, I suspect, disappears from the palette of human experience, from how we articulate our selfhood to one another, and from our relationship to our own private, inner depths, when we encounter evidence of the ocean’s despoliation. Much fascinating scientific work is being done on how animals are learning to navigate the changing world’s new behavioral demands, but less is dedicated to how human cultures are adapting; how our language and imagination is corroded, and in what deficit of narrative and nature we seek for fresh expression.

Without notice, we’re off. The engine strains, and the prow of the boat tilts back, hit by slab after slab of spray. It becomes necessary to unlock your knees to take the impact and bounce of each wave, as when surfing—and it’s excellent fun. No one can juggle a camera or binoculars now: we’re all gripping to any available railing with both hands. A woman near me pukes a spectacular mustardy arc over the side. The woman’s daughter looks on alarmed, from within the clutched tent of the waterproof jacket she has borrowed from her mother. She can’t detach herself from clinging to a fire extinguisher, buckled to the exterior of the cabin (the only anchor point she’s been able to locate). I give her a grin, and my lip catches on a dry eyetooth, studding in the cold. All knuckles whiten. Seawater griddles the windows, glistens the boat. Whole-head smiles sweep through the group, like the beams from beacons atop dozens of crazed lighthouses. “Whoop!” yells a man in a Sea Shepherd sweater, his hair whipped up on end. “Whooop,” retort people on the portside, louder. There are whales, there are whales! If this is being announced on the speaker, Ros’s voice is lost to the drag of air.

Humpbacks? Yes, humpbacks. Now visible, white like little teeth. Are the whales leaping? Leaping! How many? Three? Four whales? We are gaining on them! Three. They are white, and also black, chrome blue, and mineral gray. Will the skipper slow the boat? At that very thought, the engine modes down and the reek of exhaust pulls over us, thick as a quilt. The fumes dissipate, and the whale-watching tour motors forward at a more moderate speed.

People are putting on their sunglasses and taking off sweaters and lens caps. We’re jostling around the bow to watch the whales in the distance, salt air high in our nostrils. Homunculus whales at this interval, erupting from a patch of ocean without pattern. Gradually the boat homes in on them, and we can see the humpbacks sending up great crescents of salt water, slamming their bulk, over and over, against the sea’s surface. I want to describe it as beautiful, and sudden, like catching dandelions pinging open in cracks in the pavement, though it’s more akin to witnessing a demolition from afar. You think of cathedrals falling into their basements after a brutal reformation, the dynamite containing, yes, diatoms—the silicate reliquiae of ocean microorganisms.

Alleluia. Then, sometimes, a whale’s flukes come down with the force of plunging iron—a move known as “lobtailing.” Boom.

In the air, the humpbacks are majestic. They spear far higher than seems probable, pulling themselves almost wholly up out of the sea. At the apex of each leap, the whales barrel-roll, or capsize backward. The humpbacks look built for flying, as much as for their undersea peregrinations. They launch. The humpbacks only decide, at a point, to fall. These whales are wonderful. People with binoculars stumble, gasp, or cry out. The humpbacks stay below for long minutes, reappearing to the north or the east. In the time the whales are underwater, no one speaks. Cameras pop and whirr.

Ros lets us know that the whales’ airborne stunts are believed to dislodge any “barnacles, critters, or algae” that grip to them on their journeying. What is happening here, she says, is as grizzly bears scratch their backs on tree trunks. However much the cetacean acrobatics look like mirth, we would be wrong to put that idea onto what we’re seeing. The whales are dislodging pockets of lice (whale lice!) that irritate them.

Though humpbacks are a balletic species above water, the energy required to boost a whale out of the sea comes at an immense cost, physically—particularly as these whales are in the end phase of their migration and likely haven’t eaten for months. A breach happens, as the cetologist Hal Whitehead puts it, “at close to an animal’s maximum power output.” Viewed from an evolutionary standpoint, therefore, breaching should confer on the animal some significant advantage. After returning to shore, I will send an email to Robert Harcourt, a scientist working on southern right whales, to ask his theories as to why humpbacks perform these vigorous leaps. In reply, he will pass on a recently published paper suggesting that, counter to Ros’s idea of whales ridding themselves of parasites, the breaches might effect a kind of sonic communication; a splashing dispatch that thunders between humpbacks, miles apart, indicating something different to whale song.

It’s also plausible, and I insist on it in the minutes of seeing them, that the humpbacks are playing. Unproductive frivolity—joy, pleasure— might need no evolutionary explanation.