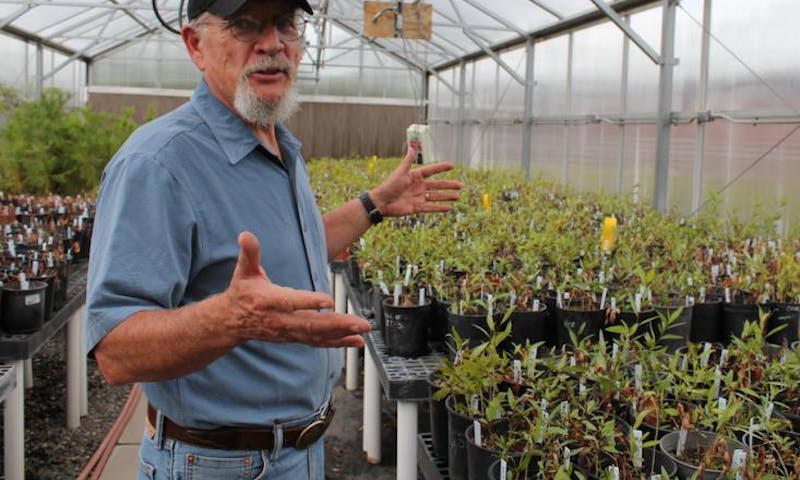 On a chilly afternoon last October, at a University of Northern Arizona conference, Thomas Whitham, a plant geneticist, proposed a plan to save hundreds of species from extinction. For the last several years, Whitham said, he and his colleagues had used a series of experimental gardens to study how plants are being affected by warming temperatures—in near real-time—and how their populations might evolve due to climate change.

In these gardens, located in various ecosystems and elevations around the Southwest—from deserts to alpine forests—Whitham planted different genotypes of the same species. This enabled him to identify superior genetic lines, the genotypes that can best handle environmental stresses. The results are the culmination of a thirty-year race against climate change to create ecosystems capable of responding to a warming world.

But Whitham’s work isn’t solely focused on the future. His focus on helping critical species, and the communities they support, to survive climate change has led him to collaborate with some of the largest names in conservation—the Bureau of Land Management, the Nature Conservancy, and the U.S. Forest Service. Preliminary results from his experimental gardens, 10 in total, suggest that species have already shifted their range in response to changing temperatures. On the lower Colorado river, Whitham is applying what he’s learned to advise the Bureau of Land Management what tree species to replant after forest fires. “If they get it wrong, and plant trees that can’t handle the increasing heat,” Whitham says, “they’ll lose the whole $626 million [reforestation] project.”

Moving species to new territory has not always worked well—look at Australia’s rabbits—but “this is what we have to do,” he says. “And we’d better get damn good at it because the options are not good at all. Most people don’t appreciate just how severe the global change crisis is.” There have been five mass extinctions in the past 540 million years, and biologists think we’re already well into the sixth. A study last year, published in Nature, showed that three-quarters of today’s animal species could vanish within the next 300 years.

That’s why Whitham is studying the genetics not just of particular organisms, but of entire ecosystems, a “genes-to-ecosystem” strategy, he says. His work is motivated by the need to save species from climate change before they disappear. (A documentary about the fruits of his research, A Thousand Invisible Cords: Connecting Genes to Ecosystems, was aired by PBS in 2012.) Some days, Whitham finds the work unbearably depressing. “Thirty years ago, I would have hated what I’m doing. But then I still had hope that climate change wouldn’t get so bad.”

Growing up in Iowa, Whitham’s family owned a wholesale nursery, where they bred plants, stoking his early interest in genes. “My job was to walk the rows of the greenhouses looking for mutants,” he says. “If they looked different, we’d try to propagate them.” His early interest led him to the University of Utah, where Whitham became fascinated by cottonwoods. Along most rivers in the southwest, you can find cottonwood trees, tall plants with spindly branches gilded in yellow-green leaves. The local Apache chewed its buds as a kind of gum, fed its branches to horses when hay was scarce, smoked the leaves in lieu of tobacco, and wove its shoots into baskets.

But on a walk, Whitham noticed something striking: Some trees had millions of aphids, a small plant lice that eats tree sap, while nearby trees of the same species had none. Curious, Whitham took cuttings from 81 trees and planted them in a test garden around northern Arizona. These clones grew in controlled conditions, planted in the same soil and watered at the same time. Yet strangely, cuttings from aphid-stricken trees were swarmed again, while cuttings from healthy, aphid-free trees remained un-infested. Whitham says, “Sure enough, there was a huge genetic component to resistance” in the trees.

Whitham says, “For the first time, we’ve shown that species are connected based on underlying genetics.”

As Whitham studied the growing trees in his test gardens, he quickly realized that the impact of genetic differences within tree species weren’t limited to aphids: He found different communities of birds, attracted to the bugs, inhabited the trees unevenly too. “That [study] was really the beginning of our efforts at community genetics,” Whitham says.

Last summer, Whitham co-authored a paper, published in the Journal of Ecology, parsing a massive amount of data from dozens of specialists’ work in test gardens. He found that groups of organisms are linked by their interactions with a particular plant and therefore evolve together, similar to how traits evolve within a single species. “Charles Darwin talked about the entangled bank,” he says, referring to the last paragraph in Darwin’s The Origin of Species, which reflected on the deep interconnectedness of nature. (“These elaborately constructed forms,” Darwin wrote, “so different from each other, and dependent upon each other in so complex a manner, have all been produced by laws acting around us.”) Whitham says, “For the first time, we’ve shown that species are connected based on underlying genetics.”

This idea that communities evolve together—as opposed to evolving independently—has deep and unnerving consequences. It means that a change in genetic structure in one species can lead to a greater change in the ecosystem at large, and vice versa. The genetic diversity in certain keystone species, like cottonwoods, become the bedrock for hundreds of other organisms. Such interdependency can lead to a cascading effect in times of crisis, like after floods or fires, and makes preserving naturally diverse ecosystems even more important. Any reduction in genetic diversity in keystone species also reduces the variety of communities that they can support, which can have a ripple effect through the ecosystem in a way that’s hard to predict.

Whitham’s ultimate goal is to sequence as many genomes as possible, to find what genes cause particular trees to interact with other organisms. “Breeding the right foundation species”—species that support large numbers of other ones—“may mitigate extinctions in these areas,” he says. He’s toyed with the idea of genetically modifying desirable traits, but he’s sensitive to GMO’s critics. Ultimately though, he thinks genetic modification will be hard to avoid.

“We can be purist, and not have the species,” he says, “or insert genes. But for now we’re only selecting for traits that naturally occur.”