We’re Killing Ourselves with Work 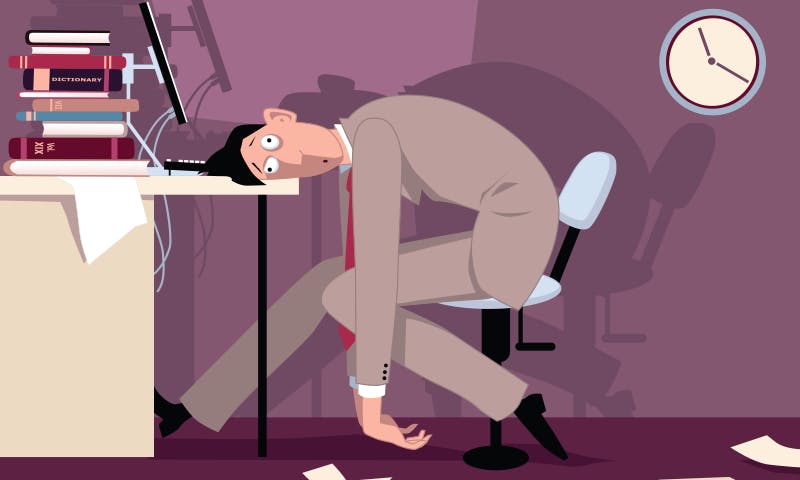 After years of being encouraged to choose a job I love so I’ll never work a day in my life, I figured I had found my ticket: science. Like many academics, I identify with my work. I pursued a Ph.D. largely because I’ve always thought of myself as curious and enthusiastic about nature, particularly the brain. Research at a university felt like a natural extension of those traits.

Now, as I approach graduation at the City University of New York, I’m hedging against a competitive academic job market and applying for all kinds of jobs inside and outside academia. And as a bewildering testament to the overlap between my work and my identity, I can feel my self-concept change with the waxing and waning prospects of each application, my personal narratives regularly reweaving themselves to make this job—no, that one—seem like the logical culmination of my efforts so far.

Work at a nonprofit? I’ve always been mission-driven, and I’m ready to leave behind the glacial pace and heady abstraction of academic research and actually make an impact, goes the inner monologue. OK, never mind, they rejected me. But now that university is emailing me back. Come to think of it, I’m passionate about education and impartial investigation, and no workplace has ever felt more like home than a college campus. The Atlantic’s Derek Thompson would call this a symptom of workism: “the belief that work is not only necessary to economic production, but also the centerpiece of one’s identity and life’s purpose; and the belief that any policy to promote human welfare must always encourage more work.”

The problem, though, is that our jobs don’t love us back. Americans put in more hours3 and take fewer days off4 than people in comparably large and rich countries, but only around half of us find our job satisfying, and just 20 percent5 find it engaging. For most of us, mistaking the desk for an altar leads not to self-actualization but to burnout and ennui. In Thompson’s words, “Our jobs were never meant to shoulder the burdens of a faith, and they are buckling under the weight.”

I’m not alone in viewing work as something like a religion.

In his latest book, Work: A Deep History, from the Stone Age to the Age of Robots, anthropologist James Suzman offers some context for why we’re so driven to work, and some suggestions for how we might make that drive less self-destructive. He starts, unexpectedly, with basic thermodynamics: The whole universe is slinking toward an inevitable heat death, as entropy increases and energy dissipates. What we call work is, in its most basic form, an intentional transfer of energy, a way of further spreading out heat. Per Suzman, complex life forms emerged “because they more efficiently dissipate heat energy than many inorganic forms.” The urge to transfer energy is built into living things at the molecular level. We are the universe refrigerating itself.

Suzman supports this point by highlighting seemingly pointless energy-burning in the animal kingdom. Peacocks with flashier (and more energy-expensive) tails aren’t actually better at attracting mates.6 Another bird, the southern masked weaver, spends countless hours building and then immediately dismantling intricate nests, one after the other, in a way that also doesn’t appear to give it any competitive advantage. Suzman argues that this profligacy, inexplicable via natural selection, is perfectly consistent with the view that organisms simply spend energy when it’s available because it’s available, in compliance with the laws of entropy. “After all,” he writes, “many of the things humans expend energy on—from building ever grander, more ostentatious skyscrapers to running ultra-marathons—are hard to reconcile with reproductive fitness or survival. Indeed, many of the things we do to expend energy risk reducing our lifespans rather than extending them.”

But this doesn’t mean we’re doomed to lives of Sisyphean servitude to the laws of physics. Suzman offers compelling evidence that our fundamental restlessness as agents of entropy need not manifest as 80-hour work weeks and cutthroat corporate hierarchies. He draws on his experience living with the Ju/’hoansi “Bushmen” of Africa’s Kalahari Desert, some of the world’s last remaining hunter-gatherers. Their way of life remained largely unchanged from about 200,000 years ago, when modern Homo sapiens first spread out around southern Africa, until the 1960s, when governments and farmers began encroaching on their lands. Though few Ju’/hoansi still forage as their ancestors did, Suzman uses interviews with tribal elders and previous anthropological research to paint a picture of quotidian pre-agricultural life.

Contrary to the Hobbesian view that it was “nasty, brutish, and short,” which dominated anthropology until the mid 20th century, Suzman describes a community of healthy, easy-going people content to work only as much as required to sate their immediate needs. The Ju’/hoansi spent about 15 to 17 hours per week finding food and about 20 hours on chores, leaving them with considerably more leisure time than the average American. Not coincidentally, they also had customs that discouraged the competition and status-seeking that motivates so much of our hustle and bustle in industrialized societies.

Tribe members with valuable resources like food or tools were required, with few exceptions, to give them away whenever someone asked. Spreading wealth depended not on the generosity of the haves but on the requests of the have-nots—a practice known as demand sharing7 (or, among the less sympathetic, “tolerated theft”8). The Ju’/hoansi also reinforced their egalitarianism by deliberately keeping egos in check: Whenever a hunter returned with a big kill, tribe members would “speak of his meat as worthless,” to “cool his heart and make him gentle.”

Suzman doesn’t spotlight the Jo’/hoansi to argue that we should all bolt for the nearest unclaimed wilderness and form anarchist communes—even if that does have some appeal. Rather, he writes his main goal is “to loosen the claw-like grasp that scarcity economics has held over our working lives and to diminish our corresponding and unsustainable preoccupation with economic growth.” If hunter-gatherers in a hostile desert can live comfortably working just 15 hours a week, Suzman argues, then surely people in the world’s richest societies can, too.

What’s stopping us? It’s complicated, but one answer is our resistance to changing our attitudes toward work—changes which, to be candid, I’ve had a lot of trouble making myself. Take my job search and the ensuing identity-whiplash. If workism has become the water I swim in—so much that the mere chance at a certain type of work is able to profoundly change my self-image—could work ever possibly be, for me, just something I do 15 hours a week to survive?

We’re not doomed to lives of Sisyphean servitude.

Adding to the confusion is the fact that so much contemporary work doesn’t have a tangible impact. The currency of academia is producing papers that, on average, maybe 10 people will ever read.9 Even people in more “applied” fields of knowledge work are liable to have a hard time articulating exactly what they contribute to society. As the late anthropologist David Graeber wrote, “Huge swathes of people, in Europe and North America in particular, spend their entire working lives performing tasks that they secretly believe do not really need to be performed.” How do we find a healthy relationship to our work when the work’s value is so unclear?

One option is to acknowledge that we’re overdoing it and dial down our cultural obsession with busyness (as much as our entropic natures allow). The economist John Maynard Keynes famously predicted in a 1930 essay that a 15-hour workweek would become the norm by the 21st century.10 “For the first time since his creation,” he wrote, “man will be faced with his real, his permanent problem: how to use his freedom from pressing economic cares, how to occupy the leisure which science and compound interest will have won for him, to live wisely and agreeably and well.” In one sense, he was right—we now have the technology and resources to make leisure our main enterprise. We just have to use them, if we want.

There are some signs that we’re moving in that direction. American workers currently have more leverage in the labor market than they’ve had in decades, and they’re using it to demand more reasonable hours, higher wages, and better working conditions.11 Governments around the world have been experimenting with shorter work weeks and universal basic income programs. Artificial intelligence is getting better and better at doing all the dull, dirty, and dangerous jobs that make society tick, freeing humans up to do more of what we like.12 And all of this is happening during a pandemic that has brought to light just how valuable it is to be able to spend time with friends and family.

This doesn’t necessarily mean that our definition of living “wisely and agreeably and well” will change for the better: Suzman tells the story of workers at Kellogg’s who enjoyed a 30-hour work week during the 1930s and ’40s but by the 1950s voted three-to-one to return to the standard 40 hours.13 Why give up their free time? Some cited a desire to escape irritable spouses at home. But, Suzman writes, “most were clear: They wanted to work longer hours to take home more money, to purchase more or better versions of the endless procession of constantly upgraded consumer products coming on to the market during America’s affluent postwar years.”

Maybe a more relaxed attitude toward work really is taking root in America. Or maybe we will remain the energy-burning peacocks of the labor force.