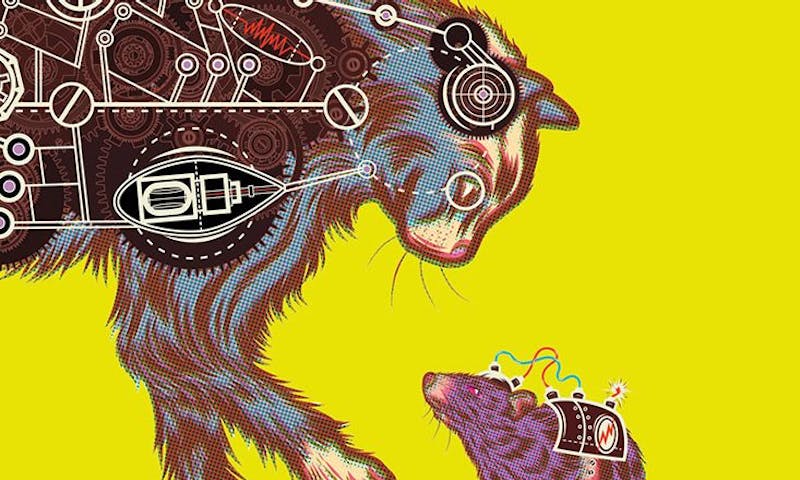 In the next war, instead of a soldier going on a reconnaissance
mission into enemy territory, consider this possibility: a cloud of “micro air
vehicles,” flying cyborgs, with built-in cameras and microphones, that could be
guided by remote control. What military commander wouldn’t want that?

DARPA, the research wing of the Department of Defense, has been
on the case. A decade ago, they experimented with building synthetic drones.
The Nano Hummingbird can stay aloft for eleven minutes; the DelFry Micro for just three. Then they realized that a far better type of flying machine
already existed. In addition to being able to cover long distances while
economizing energy, insects have a simple nervous system that was relatively
easy to harness.

Scientists at the University of California Berkeley have
discovered how to stimulate a beetle’s brain to make it start and stop flying.
They poked a hole in the exoskeleton, threading in microscopically thin steel
wire. A package of electronics mounted with beeswax on the beetle’s back
carries the camera. When electricity is sent into the beetle’s optic lobe, the
bug took flight. The lab experiment was a success.

The vignette appears midway through Frankenstein’s Cat, Emily
Anthes’ fascinating book about our latest methods of transforming animal
bodies. While the technology she describes is new, humans have been altering
animals, in a sense, for hundreds of thousands of years. The first animal we
started tailoring may have been ourselves, when a distant ancestor dried an
animal skin and managed to wrap it around her torso such that it could hold a
baby securely (as described in “We Built These Bodies” from the premier issue
of Nautilus). This saved a lot of energy,
freed up her arms to perform other tasks, and changed the course of our
evolution, allowing babies’ brains to develop more outside the womb. With the
advent of agriculture, humans became much more sophisticated about breeding
animals and crossing varieties of plants. Shaping the living things around us
emerged as a defining feature of our species. Now transgenic technology—tinkering
more directly with an organism’s genome—is poised to again transform the bodies
of animals around us. Yet our society is far from having clear conclusions or
policies on what modifications we should allow ethically.

We don’t want shampoo being rubbed in Snuffy’s eyes to test the
new no-tear formula, but if Snuffy were a pig whose organs could be genetically
modified to assimilate easily into human tissue, polls say the majority of us
are in favor. We nod our heads when Peter Singer calls the prioritization of
human needs “speciesism,” but now what about those new pig lungs for your
nephew with cystic fibrosis?

A case in point concerns two scientists from UC Davis who have
bred transgenic goats that produce higher levels of lysozyme in their milk, a
protein that aids in digestion, and could help the 2 million children who die
annually around the world from diarrheal disease. Farming animals for
pharmaceutical purposes—known as “pharming”—holds much promise for medical
therapies. Yet the FDA has been slow to approve. Meanwhile the 150 goats whose
mammary glands are bursting with what might be liquid gold are at pasture.

Not only do we struggle with whether to sanction the medical use
of transgenic animals, we also need to rule on on whether to permit more
fanciful tinkering. For instance, the process of easing the pain of losing a
non-human member of the family is taking a new turn. Commercial cloning
companies offer to clone Fluffy for about $100,000. The Korean doctor Hwang
Woo-Suk needed more than 1,000 dogs before succeeding with the pup clone Snuppy
in 2005. The technology will undoubtedly bring that number down, but are we
willing to allow the “use” and destruction of countless other animals, to get
an identical twin of Fido? For some, it’s a professional investment. A cowboy
who’s worked well with a bull might not want to learn how to handle a new
bovine partner every few years. Will a big scandal of the next decade involve
the shady provenance of cloned animals?

But all of this is the selfish side of animal biotech. Anthes
points out toward the end of the book that evolution has made us stewards of
the other animals, like how Dr. Frankenstein realized that he had a great
responsibility to treat the monster humanely. In addition to thinking what’s in
it for us, we should use the technology to help other species. A heartwarming
chapter is devoted to the dolphin Winter, whose injured tail was replaced with
a prosthetic one. Anthes dreams of a time when racetrack horses can receive
replacement bionic legs instead of being euthanized, when we can insert
“bio-thermo” chips in farm animals to detect early sign of disease outbreak,
and other ways that we can take better care of life—not just the human variety.

Yet for now, we are in flux, with legislation regulating the
animal biotech industry highly inconsistent. Anthes eloquently explores the
arguments framing the debate. And perhaps there’s no better indicator of how
the future might shake out than the recent past. The recent obituaries of British physiologist Robert Edwards, who
pioneered in vitro fertilization in 1978, remind us of a time when assisted
reproductive technology stirred fear in the public. The Church heaped abuse on
him then. Human rights groups were wary of making life “artificially.”
Thirty-five years later, what’s most remarkable is how standard it’s become.