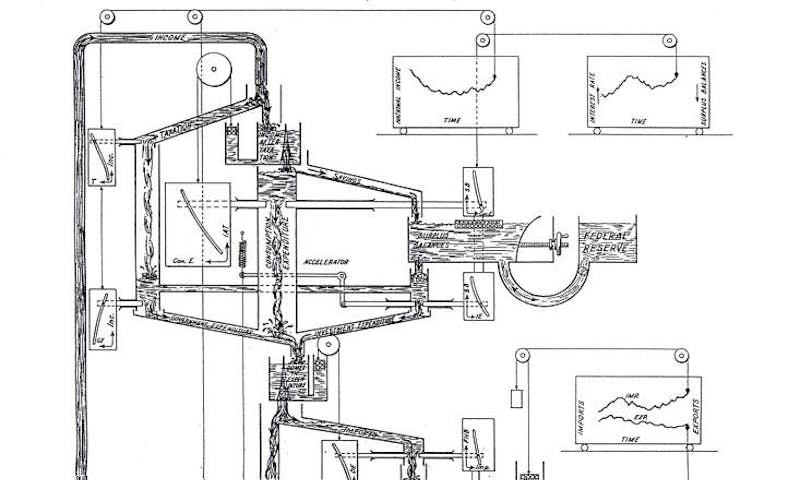 While researching my soon-to-be-released biography on John Horton Conway, an iconoclastic and very influential mathematician at Princeton, I organized a research trip to his native England. We visited with Conway’s elder sister, Joan, in Liverpool, and convened a reunion at his alma mater, Cambridge. We met there with a few of his “sum chums,” his co-authors on an authoritative “atlas” of all the existent terrain, all the knowledge, about “finite simple groups,” in the field of group theory, the mathematical study of symmetry. Invariably, we’d arrive at the next destination on the itinerary, whereupon Conway would confusedly proclaim:

I’m not quite sure WHY I’m here. What am I doing?

One such destination was a classroom, the Meade Room (after the economist James Meade), at Cambridge’s faculty of economics. Not long before our departure to Cambridge, Conway had told me the story of the water computer he devised as an undergrad: WINNIE, he called her, for Water Initiated Nonchalant Number Integrating Engine (or some such). Then, serendipitously, I happened upon an article by Cornell mathematician Steven Strogatz in the New York Times, “Like Water for Money”—about another water computer at Cambridge. A water computer that modeled the economy.

Another water computer. What were the chances? We requested and received a private audience with Allan McRobie, a reader (that is, a professor and researcher) in engineering who regularly gives demonstrations of “The Machine,” as he calls it; he gave a demo last week to a group of architecture post grads, and this week he’s booked with a filmmaker, and the week following, an audience of A-level students.

Conway and I took our seats in the lecture room, along with Conway’s Cambridge friend Brian Josephson, a Nobel-winning theoretical physicist, as well as Conway’s 10-year-old rascal Gareth, who had been drinking inordinate amounts of water, sucking on his water bottle everywhere we went. The four of us sat back and let McRobie explain, as he had on many occasions…

“It is a thing of wonder and joy,” he began, during a demonstration to a more recent audience. “I would give this talk to an empty room. It is a brilliant machine.”

It’s the size of a large wardrobe, about five feet wide and seven feet tall. And with all its engineering exposed, the pipes and pumps and buckets and doodads, it looks the part of the proverbial Rube Goldberg machine.

“It solves the equations of Keynesian macro economics using water flowing through pipes and buckets,” said McRobie. “It’s not a metaphor. There are lots of metaphors about water and money. You’ve got income streams and cash flows and liquidity and siphoning off, and things like that. This is an analogy, an analog, an analog computer. We can actually quantitatively solve these equations. Whether or not the equations are a good reality I don’t know, because I am not an economist and I can’t tell you whether the Keynesian model is a good model. But the Phillips machine is a great representation of the Keynesian equation.” McRobie is also quick with the disclaimer that he’s not a historian, and that facts should be checked with Mary Morgan, a professor of history and philosophy of economics, at the London School of Economics.

“The Cambridge machine,” Morgan said in an email, “is a restored version of the Phillips-Newlyn Machine. The original prototype version—the Newlyn-Phillips Machine—is at Leeds. There is also a restored version in the [London] Science Museum,” positioned prestigiously next to Charles Babbage’s calculating engine.

There were two creators, said Morgan, clarifying: Walter Newlyn at Leeds University and Bill Phillips at LSE, both economists with an engineering bent. In 1949 they debuted their prototype machine, sometimes called MONIAC, for Monetary National Income Analogue Computer (and continuing in the tradition of the earlier computer models ENIAC and MANIAC). They manufactured and sold about 14 of the MONIAC Mark II worldwide—to General Motors and Harvard, also to universities in Melbourne, Rotterdam, and Istanbul, as well as to the central Bank of Guatemala, among other customers.

Here is a schematic drawing of MONIAC, courtesy of LSE’s James Meade Archives, with more detail explaining the machinations:

“This drawing of the Mark II model—probably from the American marketing literature—wonderfully manages to conjure up the rushing and splashing involved so that we can almost hear the noise of the water as it moves around the system,” noted Morgan, in her book The World in the Model, How Economists Work and Think, wherein she delves into the history of water as money metaphor:

Money is often thought of as liquid: it runs through our fingers, it leaks out of our pockets and we are liable to drown in our debts. The metaphorical use is as extensive and as invasive in the technical language of economics as in our everyday talk. From David Hume’s eighteenth-century observation that, like connected bodies of water, the value of money will always come to a common level between places, to the modern-day “liquid assets” (cash and assets that can easily be turned into cash) and the “liquidity preference ratio” (our preferences for a certain proportion of assets held in ready, or easily accessible, money), economists have delighted in the use of metaphorical language.It is not just money that prompts economists’ flights of rhetorical fancy. Leon Walras in 1900 described the tendency of the market towards an equilibrium to be “like a lake agitated by the wind, where the water is incessantly seeking its level without ever reaching it.”

…To fill in a picture of some economic world in which money has the property of being a liquid requires the use of imagination. But first the economist has to choose that world. Is it like blood circulating around a body, as Francis Bacon and some of the early Mercantilist economists thought it?Or is it like water in a natural ecology (as Hume suggested), or like a tidal flow between the oceans and lagoons (as Irving Fisher later suggested)?Such a choice of world is the starting point for a model, and because each of those worlds is more constrained in its possibilities than the original metaphor (that money is a liquid), it provides more explicit guidance about the analogical features and suggests how to depict the properties of the modelled world more exactly.

(Also see Morgan’s talk on models in economics and her shorter (than the book) version of the Newlyn-Phillips creation story.)

McRobie, meanwhile, is all about the pipes and the pumps.

In addition to his expertise with MONIAC (he restored Cambridge’s machine to working order), McRobie teaches water engineering. “I think water is the way to economic development: putting clean water into the mega city slums,” he said, when I touched base with him recently. “There is a deep linkage, in my brain anyway, between economic development and water engineering. And then the Phillips machine is this wonderful about-face of that concept—the economists are using water to solve equations. And my view is they should actually be using water to solve economic-development problems.”

I asked McRobie if he remembered the demo he did for Conway. He did, he said, very clearly. “It was probably the highest my IQ has ever been on average—if you take the average of me, John Conway, and Brian Josephson, my IQ was very high on average that day.” He recalled, however, that Josephson fell asleep as MONIAC gurgled away. Conway seemed at once distracted and intrigued, noting scant similarities with his WINNIE. Though MONIAC, like WINNIE, has been known to spring a leak. “That’s called leakage,” said McRobie, punning on yet another water-engineering term used in economics.

Gareth, during the demo, was casing and pacing the room. He found a long wooden lecturer’s pointer and wielded it like a sword, dancing about and jousting with the aluminum slatted blinds. And what with all the water sluicing about, inside his own system just like it was within MONIAC’s Perspex reservoirs and pipes, Gareth, as he kept telling his dad, was also in urgent need of springing a leak.

Siobhan Roberts’ new book—Genius at Play, The Curious Mind of John Horton Conway—is out on July 14.